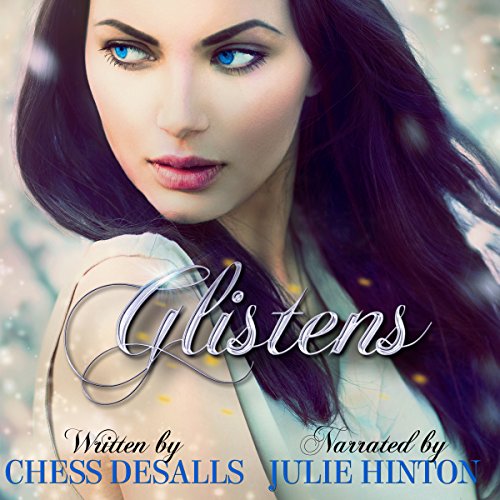 Marian Spritz won't gain guardian fairy status if she fails her summer school project. But when she hears a call for help - a song felt only by Glistens - she must choose between not letting her schoolwork and teammates suffer and protecting a ward who faces grave danger.

A guardian can't shine without the song of her ward.

What listeners say about Glistens

What an enjoyable short listen this book was. A great young adult even early teen book. A clean story about fairies 🧚‍♂️ better known as Glistens in this case.
I would highly recommend this book to anyone who likes this genre.
Well done to the narrator nice clear speaking and the use of voice variations for male to female was great.

sadly to say, but this book was a big let down. the whole idea of the book is great. but the book itself wasnt.

Glistens was a fun listen. I loved the ideas and world the Author created. I believe this could be made into a full length novel and possible series if done correctly. I enjoyed Julie Hinton as narrator and I look forward to more from this author &amp; narrator.

The first thing I learned while listening to this, Glistens is a noun, not only a verb. Really cute story, but I couldn't stand how the narrator performed Sal. Way too whiney.

helping others can make a difference.

Would you be willing to try another book from Chess Desalls? Why or why not?

I have listened to others by Chess Desalls and look forward to more books to come.

Julie is a new voice for me. And listening to her in the first chapter, I liked her. She does different attitudes with slight voice differences for us to easily separate and get a feel for the characters. This is something that really pops with audiobooks, we don't get when reading. But I think there is a slight ting to Julie's voice, almost an echo. It's hard to tell and could be nothing, or could fit with the fairy feel. For the most part, Julie flows the words as she narrates. However there are moments where she feels as she's working to enunciate the words properly and clearly.

*This audiobook was provided by the author, narrator, or publisher at no cost in exchange for an unbiased review at my request.

This is a short story at just over 2 hours audio. It feels like a lovely little story for young adults, in middle school and up, to read/listen to. It brings to the front that promises are made and you honor them, but it's also good to talk to others. That others can help. Sometimes, working as a group is better than alone. And, sometimes, helping those that are not so nice means a great deal to them.

I like Marian. She worries and feels bad, but she's also not perfect. Her attention strays when in class, causing her to miss information from class and such. But this feels like a normal person. But when she learns she's got a ward, she does worry about that person, even if it's someone she never expected.

Enrik is the possible boy distraction, love interest, in this story. He sounds sweet. He's also concerned for Marian when he sees her during her moments that she feels the song. Marian is determined to not let him be a distraction, I like this take on her relationship with Enrik.

Sal is so worried. She comes across as whiny at times, but that's her personality. She's so stressed over the great chance of failing this summer course and never becoming a Glisten. She's so worried that she doesn't want Enrik and Marian to become romantically involved as it would be a distraction from their projects, and they'll fail. And much on her mind with her father's disappearance.

One thing I find cool, it's near my home town! They are in Pennsylvania and near the Allegheny River. Pittsburgh is even mentioned. Cool beans!

It was a cute short story.