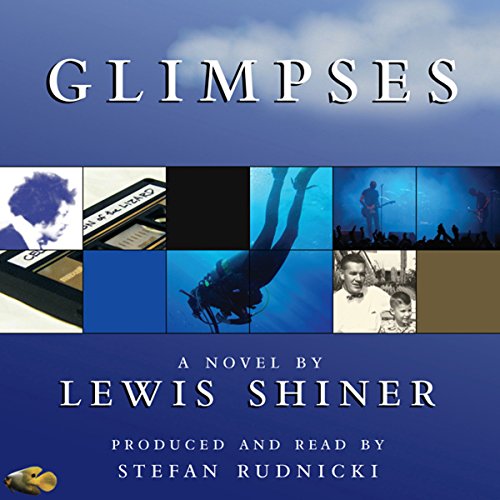 Ray Shackleford is trying to deal with the death of his father and the collapse of his marriage when the impossible happens. Music that no one has ever heard before begins to play from his stereo speakers. It is only the first step on a journey that will take him to Los Angeles, London, Cozumel, and points far beyond, and bring him face to face with Jim Morrison, Brian Wilson, Jimi Hendrix - and his own mortality.

"Shiner couldn’t have written this book without a deeply felt sense of the fragility of art, of how many great works have passed into the ages never to enlighten, inform, or entertain new generations. Though the masterworks he conjures up in such exquisite detail are lost to us, we now have a bit of compensation for their absence: a masterpiece of the imagination called Glimpses." (Richard Foss, Los Angeles Reader)
"Glimpses has the raw power of a documentary, a nitty-gritty, minute-by-minute evocation of a highly personal journey. Glimpses captures the sixties perfectly—I was there, and it was the way Shiner writes it." (Dr. Timothy Leary)
"Shiner writes with intense feeling about the music Ray loves and the turmoil he endures. The novel sparkles with painfully perfect evocations of the yearning, anomie and need that wrack Ray, yielding a story of uncommon sensitivity, insight and redemptive power." ( Publisher’s Weekly)

Moving, remembering, and being.

This is a wonderful book about a late 80s stereo repairman (Ray) who discovers that he can, through some kind of power of imagination and love of music, actually cause lost albums to come to be. A musical trip through the late 60s (The Beatles, The Doors, Brian Wilson) as Ray re-lives both his own youth and the time and character of the musicians who made the music which provided the soundtrack to a tumultuous era. In the present, Ray is dealing with the death of his distant father, the tenuous threads which hold his marriage together, and coming to terms and some form of understanding with both. Stefan Rudnicki's narration is (as always) rich and resonant, capturing's Ray's voice and grounding the book in a dry, gravelly baritone which suits it perfectly. This is an authentic book of a time that was and of timeless music that almost was, and true human characters moving between them. I enthusiastically recommend it.

What did you love best about Glimpses?

Lewis’s tales of a time bending rock fan gives us an intimate look at rock legends as well as a realistic portrayal of a middle aged man whose faith in rock and roll to change the world is put to the ultimate challenge.

Interesting premise but stinker of a story

Ray Shackleford has a gift that just pops up out of nowhere one day - the ability to bring to life classic recordings that were abandoned and never saw the light of day. One day he listens to the Beatles and re-sculpts the sound coming through the speakers. No explanation given as to how this happens, and everyone he tells about this gift just believes him on face value. No skepticism, no questioning and soon enough an old record company executive hires him to make bootleg CD's.
He goes on to bring to life albums thats were abandoned by The Doors, Brian Wilson and Jimi Hendrix. Amongst these 3 scenarios there is some admittedly interesting speculative writing, but about halfway through the book, I suddenly realised that while the narrative was moving, nothing was actually happening - we didn't seem to moving towards any destination - we were just aimlessly drifting along....
As it turns out, this gift of Ray's is somehow ultimately supposed to be some kind of way of trying to reconcile with his recently deceased and long estranged father. Say what??!!!???!

Would you listen to Glimpses again? Why?

I have already listened to this book twice and enjoyed it more the second time. There were slight nuances I missed the first time but when listened to again helped me see more clearly the character of Jimi Hendrex and Jim Morrison and Brian Wilson

What was one of the most memorable moments of Glimpses?

There wasn't one specific moment that captured me but rather a cascading sense of a personal journey that created incredible chances to see life from a different view point.

The tone of his voice helped created a perfect visualation of the main
character for me and also the time and place.

I grew up during the seventies so all the characters made perfect sense to me. Because of Shiner's writing style I remembered people and places that I hadn't thought of in a very long time. The seventies became alive for me all over again the fashions the lauanguage and especially the music. It rekindled my memories of all the music and personalities and history that happened during that tumultious and explosive time in out history.

Really enjoyed the book!! Big fan of the reader!! overall great listening! i recommend it!

This was my second time listening to Glimpses. I enjoyed the story and the telling of it even more than the first time I listened to it several years ago, and that's not just because I live in Austin.

I didn't think the storyline was believable... and the sex scenes were mansplained and awkward...