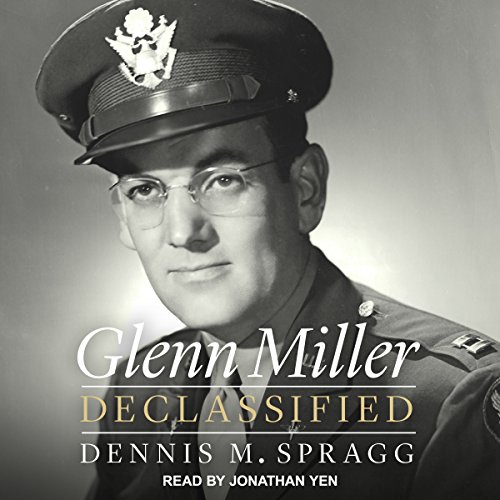 On December 15, 1944, Maj. Alton Glenn Miller, commanding officer of the Army Air Force Band (Special), boarded a plane in England bound for France with Lt. Col. Norman Francis Baessell. Somewhere over the English Channel the plane vanished. No trace of the aircraft or its occupants has ever been found. To this day Miller, Baessell, and the pilot, John Robert Stuart Morgan, are classified as missing in action.

Weaving together cultural and military history, Glenn Miller Declassified tells the story of the musical legend Miller and his military career as commanding officer of the Army Air Force Band during World War II. After a brief assignment to the Army Specialist Corps, Miller was assigned to the Army Air Forces Training Command and soon thereafter to Supreme Headquarters, Allied Expeditionary Force, in the UK. Later that year Miller and his band were to be transferred to Paris to expand the Allied Expeditionary Forces Programme, but Miller never made it.

Miller's disappearance resulted in numerous conspiracy theories, especially since much of the information surrounding his military service had been classified, restricted, or, in some cases, lost.

Let me say first that this is an authoritative book. It is very well researched. And if you want to listen to a research paper I do recommend it. But for the rest of you...

This book is so full of detailed information that it is at best tedious. My wife and I made our way through all of it. Yes, I know I could have returned it and perhaps I should have, but we like knowing about Glenn Miller. We just didn’t need to to know so much trivial information and peripheral details.

Just be aware that this is not a casual story. It is authoritative. There may very well be better books out there to learn more about this amazing person who was taken too soon. I do not recommend this book unless you are doing research on Miller. At least the narrator did his best to keep it interesting.

Audible needs to drastically change the description. What is there now does not adequately explain this book.

This iBook helped me appreciate the immense contributions Glenn Miller made to the European was effort. On that count the book is excellent. The book title might lead one to expect some new information on the hows and whys of his 1944 disappearance. I found none of that. What I did find was way too. much unsubstantiated conjecture. So, read this book to get a wonderfully clear view of Glenn Miller's contributions. Do not read this book to learn anything new on his disappearance.