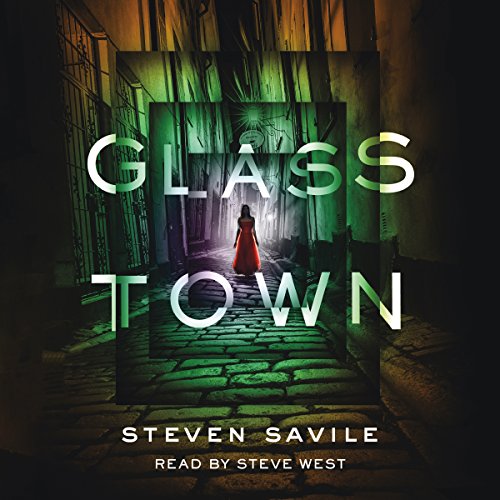 By: Steven Savile
Narrated by: Steve West
Try for £0.00

Steven Savile is an international sensation, selling over half a million copies worldwide and writing for cult favorites including Doctor Who, Torchwood, and Stargate. Now, he is finally making his US debut with Glass Town, a brilliantly composed audiobook revolving around the magic and mystery lurking in London.

There's always been magic in our world. We just needed to know where to look for it.

In 1924, two brothers both loved Eleanor Raines, a promising young actress from the East End of London. She disappeared during the filming of Alfred Hitchcock's debut, Number 13, which itself is now lost. It was the crime of the age, capturing the imagination of the city: the beautiful actress never seen again and the gangster who disappeared the same day.

Generations have passed. Everyone involved is long dead. But even now their dark, twisted secret threatens to tear the city apart.

Joshua Raines is about to enter a world of macabre beauty, of glittering celluloid and the silver screen, of illusion and deception, of impossibly old gangsters and the fiendish creatures they command, and, most frighteningly of all, of genuine magic. He is about to enter Glass Town. The generations-old obsession with Eleanor Raines' unsolved case is about to become his obsession, handed down father to son through his bloodline like some unwanted inheritance. But first he needs to bury his grandfather and absorb the implications of the confession in his hand, a letter from one of the brothers, Isaiah, claiming to have seen the missing actress. The woman in the red dress hadn't aged a day, no matter that it was 1994 and she'd been gone 70 years.

Long-buried secrets cannot stay secrets forever. Hidden places cannot stay hidden forever. The magic that destroyed one of the most brutal families in London's dark history is finally failing, and Joshua Raines is about to discover that everything he dared dream of, everything he has ever feared, is waiting for him in Glass Town.

What listeners say about Glass Town