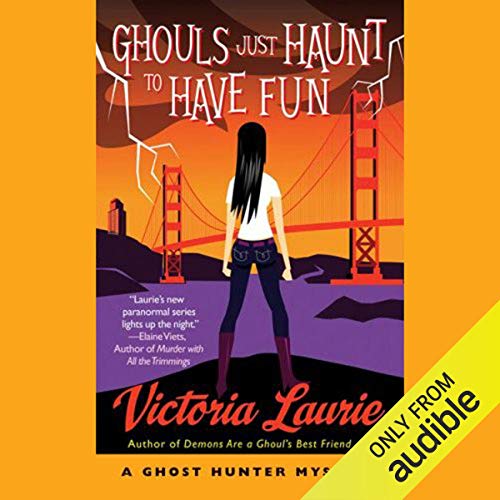 Ghouls Just Haunt to Have Fun

When ghost hunter and medium M.J. Holliday appears on a television show called Haunted Possessions, she encounters an evil knife that releases a demon. Now all hell has broken loose in the haunted hotel where M.J. is staying and its up to her to give the uninvited guest an early checkout.

What listeners say about Ghouls Just Haunt to Have Fun

Awful from the start

M.J. is duped into signing a contract she knows nothing about (tricked by her so-called "best friend", who is backed-up by her boyfriend no less) and does nothing beyond making an ineffectual initial objection.... I mean, Really? That's a break up with both of them on the spot situation (possibly with added physical harm to the "best friend") NOT a capitualte and let them get away with it situation!

That, right there, shows the dreadful premise the story is based on and I can't say it improves after that.

A doormat is not an appealing main protagonist, and doesn't make for an entertaining book.

I enjoyed all of her books. I enjoy the lighthardnessr and humor she brings tot he character.

Laurie is the best

Would you try another book from Victoria Laurie and/or Eileen Stevens?

I have read 9 books by Victoria and LOVED them all I just did not feel the tug with this one.

The Knife was the most interesting and least was the side kick.

Did Ghouls Just Haunt to Have Fun inspire you to do anything?

GREAT REALLY ENJOYED I LOVE THIS SERIES. FAST EASY FUNNY. JUST WHEN YOU THNK YOU HAVE IT FIGURED OUT SHE THROWS A CURVE. MY KIDS LIKE TO LISTEN TO THEM. WE ACTUALLY SAT IN THE CAR AND ATE SONIC ONE NIGHT WITH THE BOOK PLAYING. GREAT TIME. READY FOR MORE IN THIS SERIES. I'M ON THE LAST ONE NOW. HURRY UP.

Once again, a fun book to listen to

I have to say I have yet to be disappointed by Ms. Laurie. I really enjoy her writing and would recommend her to anyone that enjoys a good ghost story. There is humor and suspense, there is light heartedness and some scare. I enjoyed the new character in this book and I hope he shows up again if this series continues.

Be still my haunted heart!!!

her writing is so fun and expressive you're immediately taken in from the first line!! And Eileen Stevens' narration is total perfection!!! She completely captures each character!

I 100% recommend this series and Victoria Laurie's other series if you haven't already had the pleasure!!!

Victoria Laurie knows how to pick her narrators!

Loved the entire storyline. Especially how the narrator was able to differentiate between characters voices.

I truly enjoyed this book.

LOVED the Abby Cooper Mysteries, but THESE?!?!

This narrator really struggles getting Victoria Laurie...I wish she had listened to Elizabeth Michaels a little before tackling this one. I hardly EVER write negative reviews... I know how much work goes into these books. I learned about Gillie from one of the Abby Cooper stories... he made NO sense, wasn't funny, really just annoying and interruptive. Maybe it's the acting of this character in these books, but it's just the same. Also, this narrator really struggles keeping the flow going, the pauses around "he said, she said" and the overall slow pace. She does have a terrific aptitude for dialects which is really fun and does improve as the story goes on. Victoria Laurie clearly has an amazing knowledge of all things metaphysical. I'm learning a great deal.

The series just keeps getting better and better. This one brings in an additional medium to the story. It takes place in an old hotel being renovated and known for it ghosts. MJ's business partner Gilly lands the job that is going to be on TV. Once he convinces MJ it will be good for business they go on their new adventure. What a plot people being murdered, the mediums being attacked, possession and ghosts in the most unusual places. Enjoy!!

Prime ghost busting at most haunted hotel in US

Gilley Gillespie, the technical side of the partnership of Gilley with MJ Holliday, a psychic medium, had a new idea to make them big bucks and get some free advertising on the side. Hollywood had called with the idea of a sort of haunted Antiques Roadshow to be broadcast on their favorite cable network, Bravo. Gilley is totally excited about the idea, MJ says no way, and their business partner and former client, Dr. Steven Sable was already packed. After much deliberation and discussion, the three agree to go to San Francisco where the producer named Gopher would set up several mediums and several objects such as hairbrushes and other small personal items. Then the mediums would determine if these everyday items could hold such power and whether that power was limited to good or positive energy.

When the trio lands in San Francisco in their third book, MJ discovers they will stay at THE most haunted hotel in America, The Duke Hotel. However, their cab can’t even deliver them to the door because there is a crime scene taped off and blocking the entrance along with a crowd of people, police, EMTs, and construction workers working on the hotel renovation. A woman’s body lies in the center of all that, and MJ has her attention. Police allow her to near the body to question her about how she happened to end up on the pavement, and among other information, MJ learns the woman’s name and room number before she crosses her over. She accompanies the detective to her room where she spells out what happened.

While this scene seems totally unrelated to the haunted objects, it definitely ties in and helps to explain things later in the book. From one event to another, they are all tied together. The ghosts of the hotel show up for the Bravo shoot of MJ and three other psychics trying to determine if objects are haunted. They make mischief that scare two of the psychics and reveal them to be fakes. That left MJ and Heath Whitefeather, a young man who had been raised on the reservation. With so little to do there, he walked the land and spoke to the spirits he found. MJ and Heath realized that each other was the real deal and the beginnings of a friendship formed.

The shoot of haunted objects fell apart when the hotel ghosts disrupted the entire thing. However, the director, Gopher, sees a new opportunity much more intriguing that objects – these are dead people he can investigate via MJ and Heath. Since they are staying at the hotel, it becomes a necessity to deal with them. A woman is killed in the rest room after MJ notices another woman in the mirror walk into the ladies room and not exit. MJ goes into the rest room where there is another huge mirror and a now dead body. There are four of these huge mirrors framed in gold that the owner of the hotel just bought at an auction in London, where the young woman who had lain in front of the hotel had been living.

Many more details are revealed as MJ and Heath investigate with Steven and Gilley in his custom made sweatshirt full of magnets to keep the ghosts away from him, since he has revealed he is afraid of ghosts! They find benign ghosts and then they find the violent ones. It is MJ who finally begins to piece the many clues together to determine just what happened to the entire hotel.

There are many voices in the book and differing accents, too, that Eileen Stevens as narrator handles very well. She makes each person sound distinctly different from the others. Her overall narrating is done very well also; it is a pleasure to listen to. Nothing distracts from the story to bring the reader out of the context of the book. There are surprises, and I found my jaw dropping in places. In others, I routed for the characters and urged them on in the right direction. It was almost as if I were a bystander in the story itself. To bring me into the story that far truly shows a talented author.

Please excuse me while I quick go grab book 4 in this terrific series, GHOULS GONE WILD.