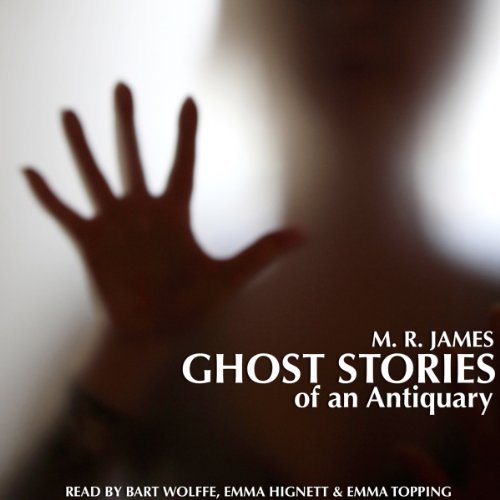 Ghost Stories of an Antiquary

Eight classic spine-tingling tales to thrill you by M. R. James. This was James' first collection of ghost stories which he intended to be read aloud in the tradition of spooky Christmas Eve tales.

What listeners say about Ghost Stories of an Antiquary

Bart Wolffe is amazing, but the other narrators sounded like they were reading the news...

A tale of three narrators

I would recommend the stories but not the two female narrators.

What other book might you compare Ghost Stories of an Antiquary to, and why?

It's a little like the Sherlock Holmes stories but with horror rather than crime as the central theme.

What aspect of the narrators’s performance might you have changed?

I thought the male narrator, Bart Wolffe, was terrific. His delivery was like an especially disdainful Sherlock Holmes when Watson has been particularly slow. In fact it didn't surprise me at all to see that he has indeed narrated the Sherlock Holmes books. He sounded supercilious and contemptuous of almost everything, which for me added some humour to the horror. I suppose his delivery is similr to that of Richard E. Grant in 'Withnail and I'.

I thought the two female narrators deliveries were totally unsuited to old Horror stories. The first Emma (Topping, perhaps?) sounded like she was reading the East Midlands news on a particularly uneventful day. And Emma Hignett (I think I have the Emmas the right way round) had a voice ideally suited to modern day women's fiction.

In short, I ended up listening only to those stories narrated by Bart Wolffe. The other stories I shall read on my Kindle.

Did Ghost Stories of an Antiquary inspire you to do anything?

Yes. After listening to the first story I switched off the light and in the gloom noticed that my wardrobe door was open. I lay awake for a while imagining that I saw a slight movement among the clothes or that I heard a rustling coming from there. Such thoughts would not have gone through my head had I not listened to that story. It thus inspired me to get up and close the wardrobe door so that I could sleep more easily.

Classic Stories of Hauntings and Supernatural Even

Tales that you might tell around the fire on a wintry evening when the wind is rattling the door and howling outside. Lots of frights and shudders. Good old fashioned fun!

One reader is terrible

I enjoyed the work of the male reader. It was professional and well acted.

The female voice was horribly monotone. I have no idea what the stories that she read were about. I couldn’t focus on the story. It was like her voice was a robot.