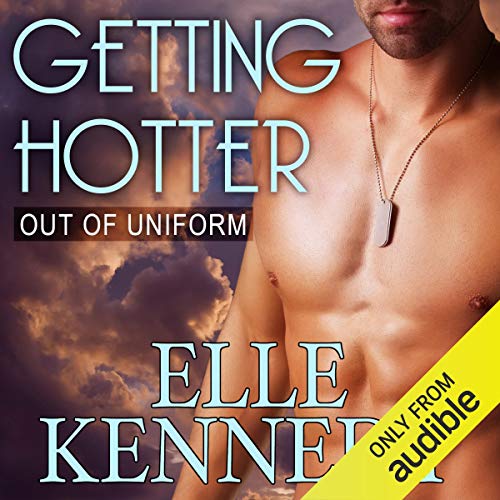 A good bad boy is hard to find. An Out of Uniform Story

Seth Masterson has been lusting over Miranda Breslin since the moment he saw her on a Vegas stage. Now that he's been asked to watch out for her as she opens a dance studio in San Diego, he's all over it, figuring it's his chance to get her in his bed. Except the stubborn single mom seems determined to deny their crazy-sizzling sexual chemistry. In typical SEAL fashion, Seth makes it his personal mission to prove her wrong. Miranda got over her attraction to bad boys about the time one of them knocked her up at the age of 18. Seth's mocking gray eyes and military-buff bod, though, are pure and utter temptation. And when a flooded apartment forces her and her twins to move in with him, she can no longer resist the urge to set off some serious fireworks between the sheets. But give him her heart? No, thank you.

Any involvement with Seth will be strictly physical - and temporary. So when Seth decides permanent is what he wants, Miranda must steel her defenses before she does something incredibly foolish... like fall in love.

Warning: This audiobook contains a bad boy SEAL who knows what he wants and will go to any lengths to get it. Expect some graphic language, hot sex, seduction, hot sex, dirty talk, hot sex, a little man-on-man action, hot sex. Oh, and hot sex.

What listeners say about Getting Hotter

Another story I could not stop listening to. She is very very very good. Well done Elle

It's been awhile since I have read such a great hot, erotic romance story, but this book was way overdue for me. I am so glad I bought it, well worth the credit. I know that whenever I stay up all night to listen to a book, it's got to be good!! I love how Seth pursued Miranda in the beginning, never giving up on his quest to win her over. This book had a little bit of everything in it...male-female romance and exploration on male-male relationship, which was a real turn on reading how that got started. The only thing I can add to this is the sex scenes could be a little more smexier. The narrator, Joe Arden made this book very sensual and hot with his sexy voice. This was the first book I have heard him narrate and I WILL be looking for more books read by him. I hope all authors know that the Narrator really DOES make or break a book for most readers. This was also my first book written by Elle Kennedy and it was a great book. I am looking forward to reading more of Elle's book in the future.

Didn't Care Much for Seth

I listened to the Audiobook. The narrator did a good job because he managed to clearly convey the difference between Seth and Dylan's personalities. I was also able to easily forget there was one person doing the narration.

I couldn't bring myself to like Seth. When I found out about the situation that caused him to make him freak out about Miranda's kids, I had a bit of sympathy for him, but he was only likeable for a small part of the book.

I don't know if I could be with a man who didn't like my kids. Especially if he was around my kids even occasionally. I didn't feel much about the Seth and Miranda part of the book.

On the other hand, I spent most of my time wondering what was going to happen with Dylan and Aidan. I also thought something might happen with Claire and Dylan.

This book had Seth's issues, a number of steamy scenes with Miranda, a few cute scenes with her kids, and a few laughs along with a HEA. It was ok.

I'm glad I was able to listen to it via the Audible Romance subscription.

Although Elle Kennedy is an incredibly gifted writer, the basic plot of Getting Hotter is getting old: an older promiscuous alpha male (Seth) is attracted to gorgeous younger & inexperienced female (Miranda), followed by lots of sexual tension.

While I liked that Miranda (24, single mother) was smart, hard-working and independent, it didn't seem that Seth saw past her beautiful face and perfect body. He was protective and helpful to Miranda but treated her like a pretty, not-too-bright playmate.

There were some humorous moments, and an interesting sub-plot involving Seth's roommate Dillon, but the main "love story" just didn't work for me. Miranda deserved a man who appreciated her personality and mind as well as her body.

Ahhh I hate writing reviews on authors I love but when the book disappoints you it is even harder, but I gotta be me and be honest.

I picked this book because it was under the “Hero” category in the Romance Package and because I have not had a book by this author that I have not liked/loved.

Only I guess because he is a Seal he gets the honor of being under the “Hero” category. I thought it meant some action was going to happen and we were going to get a heroic act in the book... Nope. First disappointment.

Seth seemed like a cool fellow until he pretty much stalks Miranda and only wants in her pant. Second disappointment.

Miranda is a mother of 6-year-old twins, and she is a commitment kind of girl. Seth doesn’t care for kids, he has strong feelings about this and you KNOW it... Third disappointment.

And of course, she gives in and has the all the sexy times with him, even knowing he hates kids. Fourth disappointment.

Of course, there was a tragic reason he doesn’t like/want kids. Predictable… Fifth disappointment.

Overall I just kept speeding up the narration to get through the book faster and I love Joe Arden so that was the Sixth disappointment.

It isn’t a terrible book it just wasn’t for me and that’s is ok… Maybe the next will be better.

Narration - was great!
Seth and Miranda, really enjoyed those characters and this story, the story of a family in the making. I really loved it.

Joe Arden narrating the whole book, multiple characters (still fanning myself).
Great story but left one story hangin at the end. Was a little disappointed to not hear “to hear how “their” story ends get “this” book”

But it was a good listen. Worth the credit.

I love this series, I do, but dang it, I cannot take the audio versions seriously when men try to do women’s voices. I wish there was a female who could fill in!

This book was interesting.  I look forward to reading more books from this author soon.

So great and sexy!

Love it when there are kids involved. This one was still super hot. Her characters are so amazing. Loved that just one narrated, Joe Arden was terrific.

The only thing I didn’t like was the abrupt ending.