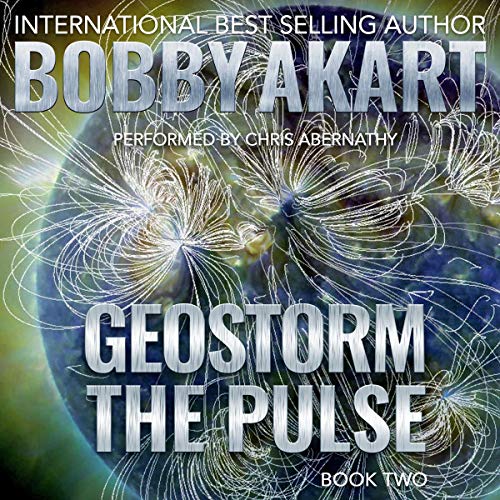 By: Bobby Akart
Narrated by: Chris Abernathy
Try for £0.00

Life on Earth hangs in the balance, and only a handful of people realize it.
Until the first Geostorm hits Europe.
As the poles shift, the planet’s magnetic field weakens, stripping away our protection from the Sun’s power.
That which gives us life, can take it away as well.

International best-selling author Bobby Akart delivers pulse-pounding thrills in The Geostorm Series, the story of a planet-changing phenomenon, a natural disaster brought about by the Earth itself.

For eons, since the formation of our planet, Earth’s magnetic poles have reversed. Powered by the machinations of her spinning iron core, coupled with the hot liquid that has churned around it since the planet’s infancy, this geologic wonder has been occurring without much fanfare, until now.

A geomagnetic apocalypse is descending upon humanity. It’s a catastrophic event caused by the Earth’s magnetic field growing restless. And now, the changes are accelerating at an astonishing rate.

What happens when the magnetic field grows weaker? There will be deadly consequences for all of humanity. The change in the world’s climate and the geological impact could alter the face of the planet as we know it. And the Sun, our beloved star that gives us life, can also wreak havoc, ending life on Earth as we know it.

The European continent has been besieged by a geomagnetic storm, one that ordinarily would cause minor disruptions in communications and GPS devices, but because of the weakened magnetic field, has destroyed power grids.

The world is playing a deadly game of Russian roulette with the Sun as the magnetic field weakens. Which part of our planet will be hit next? Follow the story of the Squire and Sarah Boone family, Indiana farmers and their children who battle Mother Nature, her animals, and their fellow man, in The Pulse.

What listeners say about Geostorm: The Pulse: A Post Apocalyptic EMP Survival Thriller

I love everything about this series except they are too short. Most audio books I have last much longer.
When broken down into a multipart series like this I find they become expensive to buy and I find myself resenting buying them....although I still do as I want to know what happens next. Catch 22.
Good stories - not good value for money.

I've loved nearly all of Bobby Akart's series, and this one started off pretty good. While Book 1 was a bit slow, it had an interesting premise and held my attention for the most part. This second one just got weird. The awkward banter between Isabella and Chapman fell flat, and this book dragged even slower than the first. When I got to the part where the dude started craving raw meat and then began devouring people, I shut it down and deleted it. I have zero interest in zombies, and much prefer apocalyptic books based on plausible scientific or political scenarios. Flesh-eating White House workers fits better within CNN than in my Audible library. This series had promise based on the scientific premise, but just felt all over the place without decent plot progression. Maybe others will like it better, but Geostorm isn't for me.

This kept me on the edge waiting to see what will happen in next second.

A great work about a very real possibility.

As usual, Akart does great at bringing the science and reality of potential disasters to life. Seeing as the poles are currently in excursion, I'd say this series is likely his most important work yet. Hopefully it makes people think about the very real possibility of a polar flip and its effects.

Author Bobby Akart’s books are always incredibly exciting, thrilling and thought provoking. With a touch of romance in a disaster situation.
Can’t wait to see the adventures book 3 takes on!!!

well I can't wait for the third I listen on audible all the time takes a while to get them out but as normal the writing and
the storyline is great.

Mr Akart has outdone himself again! Love that this author researches before writing. Kinda scary tho. Definitely makes you think about what the future might hold.

Another excellent book by Akart!

Book two in the series is an excellent follow up of book 1. Great characters and awesome ideas ....Bobby Akart has a way of writing that keeps you engaged and wanting to see what's next.

Continues the trajectory of the first novel

This series reminds me of the Woody Allen joke about the two people in an old folks home where one says, "the food here is terrible," and the other says, "yeah, and the portions are so small."

These books are kind of short and full of fluff conflict, people turning into cannibals, animals randomly going psycho, good people being bullied in their regular life by powerful jerks. I'm interested to know how the post-apocalyptic story turns out, but it seems like the author is just trying to stretch out the story to sell more books rather than get down to telling the main story, and I'm not sure it's worth buying another book just to get strung along a little longer.