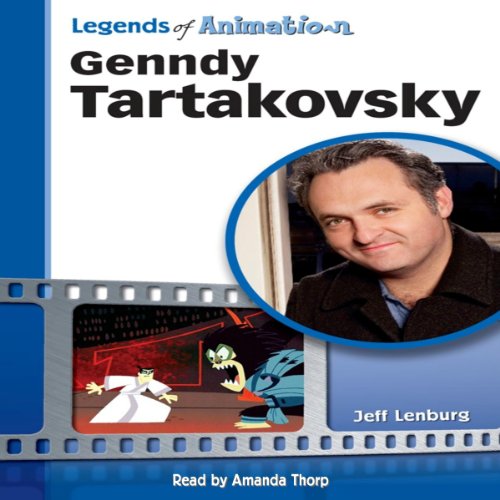 Genndy Tartakovsky: From Russia to Coming-of-Age Animator (Legends of Animation)

By: Jeff Lenburg
Narrated by: Amanda Thorp
Try for £0.00

At the age of seven, Genndy Tartakovsky moved with his family from Russia to the United States, where American cartoons and comic books soon captivated his imagination and inspired him to become an artist. After working as an animator on Batman: The Animated Series, 2 Stupid Dogs, and The Critic, Tartakovsky began to work on his own ideas. Known for fast-paced, action-packed stories and a distinctive animation style, he created the animated sensations Dexter's Laboratory and Samurai Jack and worked on the breakout hit, The Powerpuff Girls. He then directed the animated microseries Star Wars: The Clone Wars and created the original series Sym-Bionic Titan. Genndy Tartakovsky explores the unique talents of one of the most influential animators working today.

What listeners say about Genndy Tartakovsky: From Russia to Coming-of-Age Animator (Legends of Animation)

Nice informative read. One correction...It's C3P0, not 3CP0. Narration could be a little more enthusiastic.

It's an okay primer on Genndy Tartakovsky's life and work, but the writing is clunky with long tangents that eventually loop back to the topic at hand and repeating information already given.

Would you be willing to try another book from Jeff Lenburg? Why or why not?

No. The writing is dry, matter-of-fact, and simplistic.

Monotonous, stilted reading. Mispronounced names, and got names completely wrong (repeatedly calling Star Wars' C-3PO "3CPO," for instance). It sounded like she hadn't prepared for her reading at all, as if she sat down, opened the book for the first time, and started reading.