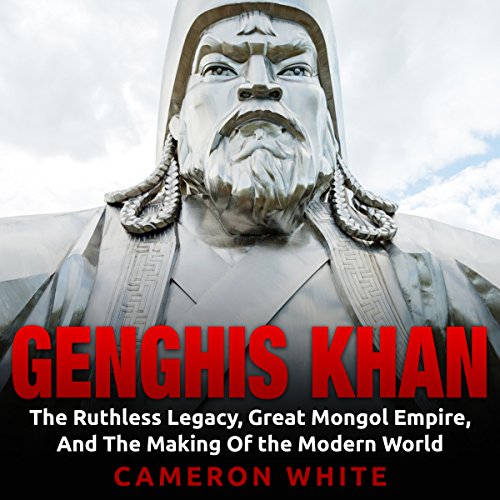 The Ruthless Legacy, Great Mongol Empire, and the Making of the Modern World
By: Cameron White
Narrated by: Jim D. Johnston
Length: 4 hrs and 20 mins
Categories: History, Ancient
3.5 out of 5 stars 3.5 (2 ratings)

It is rare for an individual in history to have successfully made such a mark on their world that people are still talking about them centuries after their death. When you consider the number of people that have existed throughout the millennia that have wielded some kind of power, it takes a remarkable individual to stand out from the crowd.

Nevertheless, one such individual did manage to achieve this near-impossible feat of attaining everlasting fame: Genghis Khan. This single person from the relative confines of Mongolia is credited with creating one of the most feared empires that ever existed. When you learn more about his story, the very fact that he achieved so much becomes even more remarkable than you may have at first thought.

Genghis Khan was a leader that was ruthless in his aims and ambitions, a man who thought nothing of destroying everything in his path. His reputation of extreme brutality sent villagers running from their homes when they got even a hint that Genghis Khan was coming their way. But is that the entire story? Was he as bad as history has made him out to be?

This was an individual who established an empire that survived for more than a century after his demise, and it did so to such an extent that it was the longest continual empire to have ever been created in the history of the world. A wonderful battlefield commander, a prime tactician, he had a need to conquer the world that shaped this man into a fearless leader that would ultimately go on to shape what we now know as the modern world.

In his book entitled Genghis Khan: The Ruthless Legacy, Great Mongol Empire, and the Making of the Modern World author Cameron White deeply chronicles how Genghis Khan with fierce determination was able to rise from the ashes of the devastation of his early years to become one of the most remarkable and ruthless leaders of all time.

Good content but choosing a narrator who whistles when pronouncing an S wasn't a great choice.

I couldn’t hear the words because of the narrator’s poor inflection. I sent it back