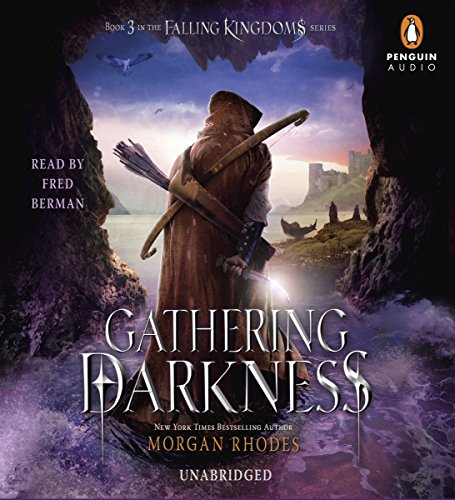 By: Morgan Rhodes
Narrated by: Fred Berman
Try for £0.00

Love, vengeance, and greed spark a deadly quest for magic in the third book of the Falling Kingdoms series

Prince Magnus has just witnessed torture, death, and miracles during the bloody confrontation that decimated the rebel forces. Now he must choose between family and justice as his father, the cruel King Gaius, sets out to conquer all of Mytica. All Gaius needs now are the Kindred - the four elemental crystals that give godlike powers to their owner. But the King of Blood is not the only one hunting for this ancient, storied magic...

THE KRAESHIANS join the hunt. Ashur and Amara, the royal siblings from the wealthy kingdom across the Silver Sea, charm and manipulate their way to the Kindred, proving to be more ruthless than perhaps even the King of Blood himself.

THE REBELS forge ahead. Princess Cleo and vengeful Jonas lead them, slaying with sweetness, skill, and a secret that can control Lucia's overpowering magic - all so they can use the Kindred to win back their fallen kingdoms.

THE WATCHERS follow Melenia out of the Sanctuary. They ally in the flesh with King Gaius, who vows to use Lucia's powers to unveil the Kindred.

...but fate can be fickle when magic is involved.

What listeners say about Gathering Darkness

Not my favorite series

Finally, some progress in the storyline is made! But I'm actually kind of bored with it none the less. I'm not sure if this series is worth investing so much time in. The characters are shallow, annoying, so angst-y, and predictable for the most part. Thus far I have been interested enough to see where the story is headed but after this book I'm not sure if I'll stick with it. It's just not very creative and the characters are pretty lacking. The narrator is seriously getting on my nerves by now, too! Most of his voices are very bad!

Storyline was nice and clean. Good plot twists. Should show which books are in what order. I want to hear more.

on book 2 and it's the slowest series ever! All the girls in this book are painful... native, insecure, dramatic andweek! I thought it was a male author to by surprise it's a female shameful.

i love the snake cleo

Great narrator, does wonderful voices and impression and entertaining book as well. Recommend any book read by Fred Berman

the book was everything the past three books were. so good and kept me on the edge of my seat the whole time. cannot wait to begin the next book and hope to one day see you in on the big screen. never have I ever been so in love with a book.
#teammagnus

this is been one of the best books I have ever read can't wait for the last one.

Love this series more and more with each book

What made the experience of listening to Gathering Darkness the most enjoyable?

The description of emotions from each character. It made the story come to life.

He has the ability to give the reader a mental picture of each character, with his voice.

No, but in really big chunks, yes.

was a great read, would recommend to anyone who has read the first two books

can't wait for the next onee

I am so hooked on this series! I also love the narration. i highly recommend!