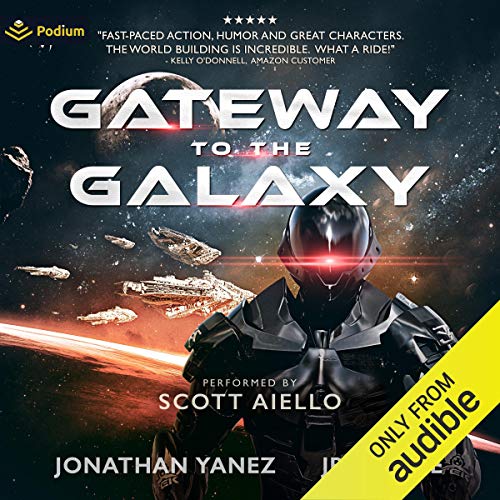 Gateway to the Galaxy

By: Jonathan Yanez,JR Castle
Narrated by: Scott Aiello
Try for £0.00

While the universe was still young, vambraces were forged, giving their users extraordinary abilities. A brutal war was won through the blood and sacrifice of patriots. Soon, the vambraces faded to legend.

Now, Frank and Marine Space Corps-1 find themselves across the galaxy, where an ancient evil is growing. From exploratory crew to the front of enemy lines, Frank will have to decide whether to play the part of hero or to be the Marine needed to win the war.

Because the victor takes the universe.

The vambraces will be found again. A new order of knights will be chosen. And once again light will do battle with darkness.

Includes a special bonus note from the authors.

What listeners say about Gateway to the Galaxy

I was expecting the typical space scifi formula book and was pleasantly surprised by the story. Great writing which invests the reader in the characters and storyline. Eagerly awaiting the next in the series. 5*!

so so good. Gateway rocks.

struggled to finish this.

So many borrowed ideas and themes.

it's sci-fi with fantasy and frosted with frustration.

the whole story is very upbeat and there was never a point with tension that I can remember.

A not too serious romp

Okay, first off, if your looking for a serious, scientifically thought out sci-fi opera, look away now.

If your happy with a fun, humerous romp that doesn't take itself too seriously and is full of in jokes and pop culture references, this is for you.

Stargate meets green lantern is an accurate description that draws heavily from both and more besides. The narration is top notch from Scott Aiello (and i highly recommended you check out the forever series if you enjoyed his narration).

Serious, yet fun. Fast paced yet detailed. I would listen to this book again as it is simply enjoyable and I am looking forward to the next book.

I usually finish books I've started but struggled with this one. Whenever it's goofy with jokes and pop cultural references it does ok, but the huge level of cringe when it tries to be somewhat "serious" brings the overall down to bottom levels. I found myself shaking my head or rolling my eyes more than I found myself immersed. No tension, no depth. Add to that the fact that the same lines get used over and over again, I found myself wanting to throw away my phone whenever I heard the word "Marine" because it was always in company with something especially cringe- worthy.

The narrator is excellent, and the foundation isn't terrible. I don't mind all the "stealing of ideas", quite the opposite. But the writing was simply not for me, perhaps if I was 11 I would have found it actually awesome.

Some very good narration and a likeable protagonist can't save this hotchpotch story which steals heavily and blatantly from Green Lantern, Stargate and Lord of the Rings. I mean they travel through a Stargate, get an adornment that runs on willpower and fight a bad guy that is Sauron in all but name! Disappointed.

The story is ok , I found alot of ideas from other si fi thrown together in this story. For me the villain was generic, and borrowed from LoR. The Will, which can form into anything..... feels like a poor copy of the green lanterns powers, and very little imagination went into what he could create.
overall it was ok. The narrator was good, will check out his other work. As for this story it has not inspired me to continue this book series.

Nothing too special, ok action and characters were a bit shallow. Most likely will not be purchasing the second part (4-6).

not bad, a little cliché