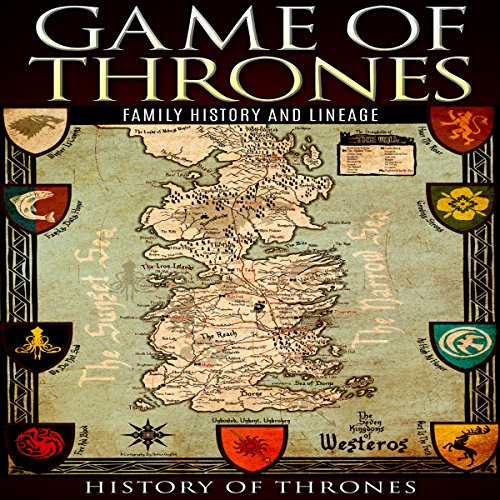 By: History of Thrones
Narrated by: Phillip J. Mather

A Game of Thrones is one of the most popular and successful fantasy fiction series in the world to date. With the success of the novels came a widely-loved television series. While you might be a loyal fan of the books, the show, or both - do you know all about the history of the leading families? This book aims to thoroughly detail the early history of the houses Targaryen, Stark, and Lannister, including how they first rose to power, and what happened in the years leading up to the beginning of the Game of Thrones story. Of the houses of the Seven Kingdoms, the great houses have the most power. In the past, they were largely royalty, but have sworn to the Iron Throne since then. Do you know how the Targaryens first took control of the land of the Seven Kingdoms? Follow the tale of Aegon the Conqueror, and learn how he used his peoples' might to force a union of the kingdoms. You will follow the story of the dragons, and find out how they came to be killed off, leaving the Targaryens vying for power with the other houses. Despite their great conquests, they too are among the houses who play the game of thrones, attempting to restore their name to glory. And what of the Starks, who were once the Kings of Winter, ruling over the North. They fought off advances from invaders and remained in power for thousands of years. How did they come to lose their hold over their kingdom, to become only wards? And what happened to turn Lord Eddard away from his caring of the throne? The Lannisters of Casterly Rock were the Kings of the Rock at one time. Ever since the legendary Lann the Clever took it for himself through trickery, they have been rich and powerful. These people of the First Men used marriage and alliances to strengthen their hold over their neighbors. But their insidious tactics worked to bring an Andal to be the ruling Lannister. Learn more in this book!

The narrator is very good, I liked him much more than Mr. Dotrice. Good information