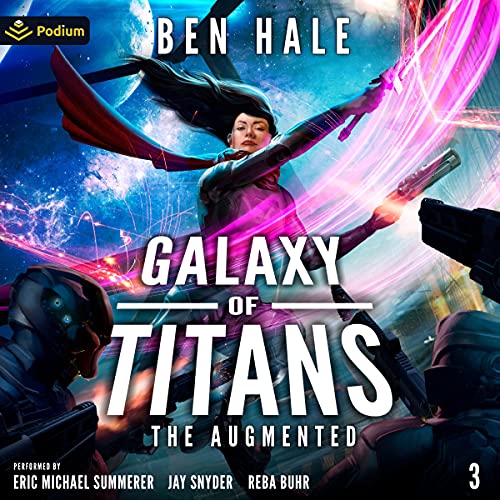 House Bright’Lor has established a secret world for augmented humans, built cities, and enhanced more slaves - but their future has never been more tenuous.

Dragorn Bright’Lor, imprisoned for crimes against the Empire, has been forced to watch his sons flourish in his absence. Armed with a powerful new ally, he has never been more dangerous. Ero and Skorn must stop him or risk losing everything, a task made difficult when an explosive secret comes to light.

Reklin is trapped in the Burning Ghosts, the most feared criminal organization in the galaxy. When he continues to try and escape, Visika kidnaps a member of his family to control him. It’s a deadly mistake. She may be the Ghost Queen, but Reklin would defy the emperor himself to protect his own.

As threats against House Bright’Lor continue to mount, Siena is thrust into the fight. She will need more than powerful abilities to steal cargo ships, avoid discovery from a ranger team, and infiltrate the military. The risks may be higher but she is the supreme augment, and when enemies and allies finally collide, one thing is certain. A Titan will be born.

What listeners say about Galaxy of Titans

Had a repetitive feel to it

Ben Hale writing style is still quite good but I was dismayed with the book as it came off as repetitively rehashing the primary theme of evil of Krey enslaving humans and relegating dakorians to a military class. As far as the Augmented, it basically focused on Siena and her sidekick boyfriend. There were introductions of new characters and a number of twists that made for an interesting listening experience but somewhat less than enjoyable.

Not really as good as the first two but still worth listening to!

The second book was one of the best book I have read in many years. But it was a hard challenge to top that. Still a great book even if you sometimes don’t get all the specified tech.

Fear of a girl is probably something that emperor Never thought he would feel, plus Ero turning in the end was coming from a long way off.
This is the dawn of magic 😉