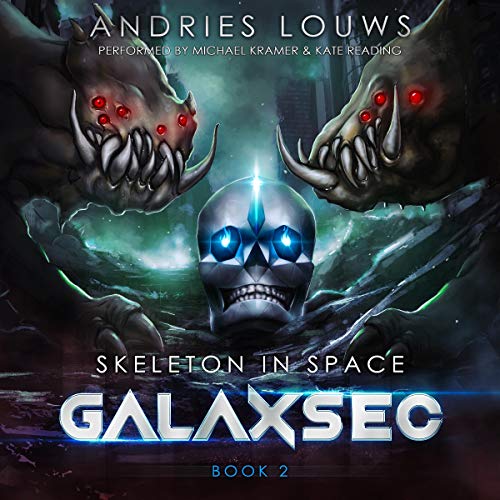 A magical skeleton, an office lady, and a corporate mercenary team walk onto a Histaff-infected planet. If only there was a joke in there somewhere.

Douglas crash lands on the planet Evengi Prime and proceeds to do what he does best: Repetitive chaos. He tries to set a plastic table on fire and makes a few pretty pink mushroom clouds, but luckily the planet is long dead and its current inhabitants are incapable of lodging complaints. He then finds a new friend in a familiar body, who helps him make sense of the strange world while getting used as a test dummy for new spells.

Fienak, a kidnapped street rat, gets caught up in this particular mess when her mercenary team is sent to investigate a rumored death, namely that of super-corporation owner "Solan". Yet before the scouting expedition can truly get started, they stumble across ghosts from the past...and a planet-spanning bioweapon that is much more awake than expected.

Join Douglas on his quest for monotonous tasks, junk food, and maybe becoming a space cop!

I was afraid the series would lose some of it's attraction after the novelty of the mc wore off. Luckily this didn't happen. The mc is still oblivious and that keeps leading to interesting scenarios. The writer did a ton of interesting world building. Narration was also well done. In short: I'm looking forward to the next one.

Author has a reset fetish.

Douglas repeatedly has his accumulated power and progress striped from him, and his creations destroyed. The more progress he makes the further he will fall. The ending is very dissatisfying and completely unessary.

Even better than the first!

Finally, this follow up of histaff had come out. It was so much better than I thought it would be. The skeleton is still moving forward on it's quest to understand everything magic and to protect his bones! This time he is accompanied by a new friend and is rewarded with deeper understanding of himself and magic! And maybe just a little of the heart! Can't wait until number 3!!

kate reading made this book barely tolerable. she read this book in verry a jarring way. she seems incapable of reading a few words properly like the word litch pronouncing it like ligh. she reads the UI messages like a robot; not like a person capable of reading, witch was established in the first book, that it was text that needed to be read by the individual. the story itself, ignoring the narration mishaps, is just as attention grabbing as the first one.

Skeleton is space is and amazing series, i love the way the MC thinks, its a bit stupid and a bit smart at the same time. really looking forward to next book <3

This was a really good book . I really like this book. Please write more.
Sincerely Douglas

What I really like about the series is the duality of being both science fiction and fantasy. Normally a book is one or the other, as they are usually mutually exclusive. This book has magic and science. It works.

I enjoyed the first book and agree with many that the pacing could be a barrier for some. In the second installment there are still slow sections, but it's inherent in Douglas's nature. I think as he gains experience, we as readers get a feeling that he is processing faster. Or at least I did. This book added some new secondary characters and spend some quality time developing them as well as Douglas. I especially enjoyed seeing the new skills and spells that Douglas gets on this leg of his journey and the destruction he levels at the histaff creatures.
I am very excited to see the story continue and can't wait to what happens next.

Enjoyed it more than the first one

I described the first book in this series as someone living their whole lives inside a box trying to explain what outside of the box looked like.

I'm happy to say that this is not the case with book #2. Maybe all the exposition is out of the way, or maybe it's because I heard it vs. reading it, but I thought it was way more enjoyable.