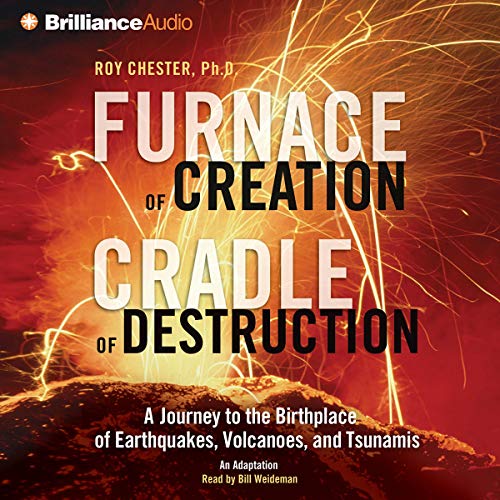 Furnace of Creation, Cradle of Destruction

By: Roy Chester
Narrated by: Bill Weideman
Try for £0.00

Over the past few years, devastating tsunamis off the coast of the Indian Ocean have killed hundreds of thousands of people. Even more alarmingly, scientists predict that these tsunamis, as well as a series of earthquakes and volcanic eruptions, will be striking with even greater frequency and may eventually threaten Hawaii, California, and Oregon.

The cause of this trinity of natural disasters is plate tectonics. Perhaps the greatest advance made in the field of earth science, the plate-tectonics theory argues that the surface of the Earth is broken into large plates, which change in size and position over time. The edges of these plates rub against each other, causing earthquakes, volcanoes, and tsunamis that continue to inflict intense destruction to the surface our planet.

In Furnace of Creation, Cradle of Destruction, renowned scientist Roy Chester reveals the fascinating history of this discovery and tells the enigmatic story of one of the great mysteries of our time: how the surface of our planet was created and how it has evolved.

From the early discoveries of Sir Francis Bacon to the beginnings of geology and the controversy surrounding the theory of continental drift, this impeccably researched book reveals the evolution of a vital scientific theory. Lucid and compelling, this book offers a long-awaited explanation of the underlying forces that shape our world.

What listeners say about Furnace of Creation, Cradle of Destruction

I think this would be a good one to read instead of listen to the audiobook. The reader is pretty boring and unenthusiastic. I got the impression at points that he didn't really know what he was saying.
As far as the actual book, there is tons of good information, might be a little much for someone who is not a professional, and a bit light for someone who is. I thought it was worth listening to though. I'm a beginning geology student.

I started listening to this but had to stop as the author rambled on on a rant against religion and Christianity in particular. I can not understand why this kind of thing is neccessary in a book that is supposably about nature and not political or religion.

Sorry, but I recommend you stay away from this one