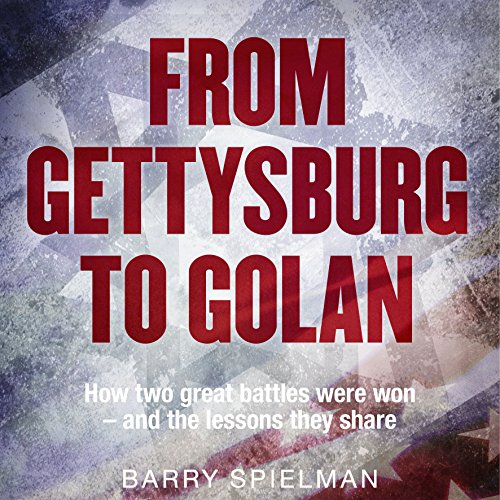 From Gettysburg to Golan

Two great battles, two historic outcomes: Defeat in either would have changed the destiny of America and Israel.

In this riveting comparative history, From Gettysburg to Golan, Lieutenant Colonel Barry Spielman shows for the first time the extraordinary similarities between the battles of Gettysburg (1863) and Golan Heights (1973). In both battles, holding the high ground would prove vital; in both, the defenders (the Union and Israeli armies) would rapidly shift their forces from one position to the next to hold off and ultimately defeat the ferocious enemy attacks that threatened to overwhelm them.

The stakes were incredibly high. Had they lost, the Union may have been forced to cede defeat to the South, and the United States would have fallen apart, irrevocably altering the history of the world; Israel would have been cut in half and destroyed. By moving between the two theatres of war as the battles progressed, Spielman delivers a gripping, blow-by-blow account of how Gettysburg and Golan were won - and the lessons they share.

What listeners say about From Gettysburg to Golan