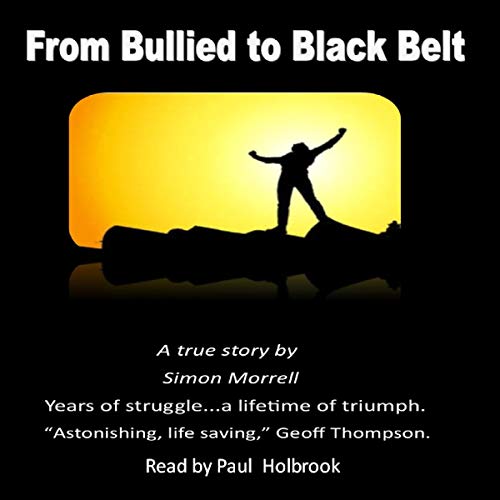 From Bullied to Black Belt

By: Simon Morrell
Narrated by: Paul Holbrook
Try for £0.00

Whilst written by a martial artist, From Bullied to Black Belt is far from a Karate Kid story. It is a true and emotional story of one man’s harrowing journey. Author Simon Morrell started life as a victim of bullying and along the way fell to violent assaults and attempted stabbings. As his life shrank, he became agoraphobic and a sufferer of panic attacks but salvation arrived in the form of Julie, a constant strength at his side who eventually became his wife. With Julie’s encouragement Simon entered the world of martial arts and surprised himself and his loved ones by excelling in it, but along the way he learnt some painful lessons in his quest for strength. As he started his recovery and obtained his black belt under world champion Alfie Lewis he thought his troubles were behind him. However they were to instead escalate in the most frightening way when a close friend became a drug-dealing enemy.

Simon and Julie battled together for three years to keep themselves and their children safe from the horrors they faced. From Bullied to Black Belt will show you that where there is courage there is hope and that adversity can be overcome and beaten. If you love Geoff Thompson (Watch My Back) then Simon’s books and teachings will be exactly what you are looking for. Simon and his work have been featured in the New York Post, The Daily Mirror (United Kingdom), the Toronto Sun, and other international publications. He has also spoken on BBC Radio about his troubles and eventual strengths. His writing won him a place on a BBC script-writing event. From Bullied to Black Belt went on to be called "the UK’s Rocky Balboa" by the Film Agency for Wales.

What listeners say about From Bullied to Black Belt