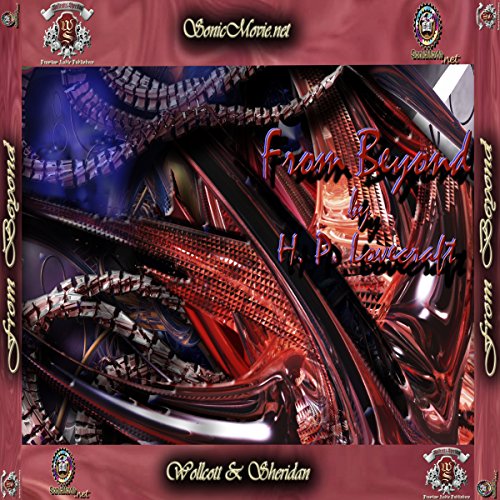 A man accepts an invitation from his best friend - Crawford Tillinghast - after a rift in their friendship regarding Crawford's scientific and metaphysical research, to discover Tillinghast has created a device that awakens sensory abilities long dormant in humans after millions, perhaps billions, of years of evolution, allowing us to see and experience all the worlds around us, previously separated from us by our five senses, and he further discovers that Crawford's invitation has an ulterior motive - revenge.

SonicMovies are premium audios with strong vocal performances enhanced by music and sound effects to such an extent they sound like movies, hence, SonicMovies. Presented by Wollcott & Sheridan (WSAPL.com) / SonicMovie.net & K. Anderson Yancy.

What listeners say about From Beyond

This is a great story that is frightening, brilliant and containing ideas that are new to me, which is something to be said when you?re a hard core sci-fi addict. It seems the sonic movies people have tried too hard to be dramatic and have obfuscated the story with their efforts. This story does not require the added sound effects or persistent use of reverb on voices making them hard or at times impossible to hear or understand.

I felt this was very overproduced and that the reading itself was mediocre. There was a lot of unnecessary music and effects which overwhelmed the actual content. The voice work was not really of the highest quality either. The overall effect was actually difficult to listen to.

After purchasing three hundred plus books from audible this is my first unquestionable regret. Combining a great author with an unintelligible narrator is a waste of time and money!

Wow, that recording was terrible

I could hardly understand anything being said for most of the second half of the book because of all the utterly over-the-top sound/voice effects. "Sonic movie," more like audio assault. I recommend looking for another recording, or just reading this one.

The story was great, but this was really frustrating to listen to.

This is a good story, but I found the audio overdramatized and difficult to understand and listen-to.