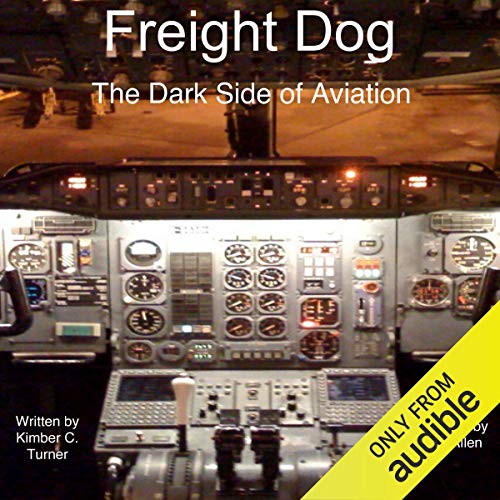 Freight Dog: The Dark Side of Aviation

Freight Dog: The Dark Side of Aviation

Don't worry about your tray table and seat back for this one. Forget what you've been told about the romantic notion of the airline business. It's not like what you've seen in the movies. Buckle your seat belt and join Captain Kimber C. Turner for a flight over a thirty year career of ups and downs in aviation. This story of his love/hate life in airplanes will take you from laughter to livid and back again. Kimber C. Turner is a retired airline pilot with over 18,000 hours of flight time, and a former radio talk show host. Now he is out of the sky and off of the air. In his retirement, Captain Turner does some voice over work and an occasional guest spot on the radio. He also writes a book now and then.

Not for sofa pilots

If you looking for amazing adventures smuggling cargo out of South America...you will be disappointed and probably write the average uniformed bad review. For the few in the industry it is a reflection of reality we can relay to and certainly get the humor. It is a collection of less them great experiences, but for each complaint a solution is offered. I liked it. And after all the pain you can't disagree that the only reward in commercial aviation is the kick in back with full throttles forward and the smile you get after punching through the clouds into a blue sky.

Are you a bellyache? Do you like to bellyache? if so, read this book! I just couldn't imagine why anybody would want to listen to anyone complain about how much their bosses sucked for 2 hours.

Any one of us could’ve written the same book about our own work experiences. This is mostly a litany of grievances against incompetent managers and bosses with some explanations about the job of freight pilot thrown in. I don’t disagree that we all have these same types of experiences but why relive someone else’s story when we all have our own?

Was hoping for an eye-opening look at nighttime aviation. Instead, minimal good pilot stories, but lots of complaining about management, which was really boring.

No personal stories, minimal flying stories and barely a word about the successful freight airlines, FedEx and UPS.

Short, mostly boring and , yet another case of a good narrator saving a not-great story.

Enjoyed the insight into aviation

If you could sum up Freight Dog in three words, what would they be?

What was one of the most memorable moments of Freight Dog?

thinking about the extravagant travel during the good years

in the clouds or hopelessly grounded

Enjoyed the narration to keep me intrigued.

nice to get pilot's perspective

I am a truck driver who did Long haul ground freight out of Wilmington, I enjoyed the pilot's perspective

This recommended audio book was a good insight into a career as a freight pilot. A good way to spearhead the industry for yourself.

I normally don't get short books with Audible
but this time I did, and I found the book very entertaining. I am a pilot and the aviation aspect of it was excellent.

this audio book was better than I expected it to be. Not to mention it was easy to listen to and follow along .

Aviation enthusiasts must get this.

If you have the slightest interest in aviation you ought to read this. A truly wonderful story.