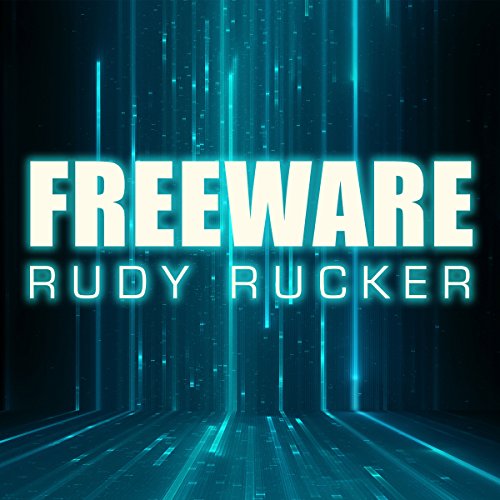 By: Rudy Rucker
Narrated by: Chris Sorensen
Try for £0.00

Rudy Rucker has seen the future... and it is extreme. The Godfather of cyberpunk - a mad scientist bravely meddling in the outrageous and heretical - Rucker created Bopper Robots, who rebelled against human society in his award-winning classic Software. Now, in 2953, "moldies" are the latest robotic advancement - evolved artificial lifeforms made of soft plastic and gene-tweaked molds and algae, so anatomically inventive and universally despised that their very presence on the planet has thrown the entire low-rent future into a serious tailspin. So the moon is the place to be, if you're a persecuted "moldie" or an enlightened "flesher" intent on creating a new, more utopian hybrid civilization. Of course up there, there are other intergalactic intelligences to contend with - and some not so intelligent - who have their own agendas and appetites. This is scientific fabulation at its most brazenly inventive - funny, cutting-edge, and deeply informed. No writer alive puts it all together like Rudy Rucker.

Artificial life forms made of soft plastic and gene-tweaked mold and algae, moldies are evolved robots in the year 2053 - anatomically inventive and universally despised. In a sleazy, low-rent future, sexual fraternization with moldies is strictly taboo - a societal sin that is of no concern whatsoever to Randy Karl Tucker. A Kentucky boy who has seriously strayed from the Heritagist religion1s stern teachings about the evils of artificial life, Randy feels a definite something for Monique, moldie bookkeeper and maid at the Clearlight Terrace Court Motel But Monique1s sudden and inexplicable abduction from the planet - coupled with unsettling revelations about Randy1s own dubious origins - is dragging the degenerate flesher and all those around him into an ugly, conspiratorial mess... even as it pulls an unsuspecting humanity ever-closer to a stunning encounter with intergalactic intelligence.

What listeners say about Freeware

Is this relevant to the plot? Not remotely. Does it, and the increasingly bizarre sex scenes between humans and "moldies" (the organic/synthetic hybrids that came to existince in the last novel to replace the purely robotic "boppers") feel necessary? Nope. It feels more like shock for its own sake coupled with an unhealthy dose of authorial middle-aged sexual frustration.

The fact that the "moldies" are described as having a perpetually fetid odor and the humans that are sexually attracted to them are known as "cheesebags" gives the whole book a rather scuzzy vibe.

We also have a quasi-Christian religion (Heritagists) that frowns upon such cross-"species" activities as well as aliens that want to eat everything - so I guess there's a plot of sorts.

Rudy's got some hangups in the bedroom

I thoroughly enjoyed the first book in the series and the second one had some interesting ideas however this book is pure smut. There is so little of value here outside of depictions of depravity on a sexual level. There are some interesting implications about the technology/biology in involved in the story however they're not explored to any interesting depth because rudy wants to write another boring ass extra pervy sex scene.

I liked the story, but I just can't stand the way the narrator reads it, I feel like it should be a more 50s kind of voice, since I get that vibe from the story.