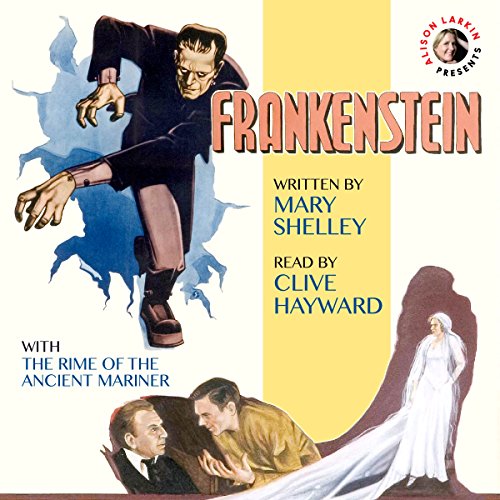 Frankenstein & The Rime of the Ancient Mariner

This chilling tale of a gruesome monster unleashed into the world by an unthinking scientist was first conceived by 19-year-old Mary Shelley on a dark, rainy night on Lake Geneva. Lord Byron and Percy Shelley challenged their friends to see who could come up with the most horrifying story imaginable. Mary Shelley did, terrifying them all with her nightmare-inspired tale.

Brilliantly narrated by British actor Clive Hayward, this 200th anniversary audio edition of Frankenstein is followed by "The Rime of the Ancient Mariner" by Coleridge which had a haunting influence on young Mary Shelley many years before the story of Frankenstein first entered her dreams.

With fascinating commentary by Alison Larkin.

"Clive Hayward passionately narrates Mary Shelley's timeless novel, commemorating its 200th anniversary. Listeners accompany Victor Frankenstein on his magnificent and horrific voyage around Europe and observe as he produces his terrifying yet powerful creation. Haywood artfully describes the beauties and hardships of the nineteenth century and convincingly depicts the story's many supporting characters. His consummate portrayals are the calm and then frantic Frankenstein and the raspy voice of the Creature as he learns to talk, observe, and comment on humans. The ensuing violence sounds at once terrifying and heartbreaking. A second work, an emotive rendering of Coleridge's The Rime of the Ancient Mariner, clearly demonstrates the poem's influence on Shelley. Biographical comments about Shelley round out a deeply rewarding listening experience. S.G.B. Winner of AudioFile Earphones Award." (AudioFile magazine)

What listeners say about Frankenstein & The Rime of the Ancient Mariner

It was clearly read with great expression. I would definitely recommend it to anyone studying Frankenstein.

What did you like most about Frankenstein & The Rime of the Ancient Mariner?

A great story and a legendary one. It's a compelling listen and combines well with The Rime of the Ancient Mariner - another classic.

What was one of the most memorable moments of Frankenstein & The Rime of the Ancient Mariner?

The moment when the creature sees his reflection in the pool.

What does Clive Hayward bring to the story that you wouldn’t experience if you had only read the book?

I tried to read this book a few years back and struggled a little, however Clive Hayward's measured delivery was excellent and lifted the text off the page effortlessly. I listen to a lot of audiobooks and based on this I would say he is one of the best narrative voices I have heard.

It was very engaging - mainly due to the accomplished narration - and a sense of sadness was felt whilst listening to it, particularly towards the finale.

Frankenstein may be almost 200 years old but Clive Hayward’s characterisations really brought it to life and showed that it’s still a relevant and intense story.
Alison Larkin’s useful introduction provided a link between Frankenstein and The Rime of the Ancient Mariner of which I had not previously been aware.
I thoroughly enjoyed Clive Hayward’s reading and will definitely look out for more from him.

Nothing short of superb

Bringing classic stories to life in exciting new ways is what I've come to expect from Alison Larkin Presents audiobooks and she does not disappoint here. The narrator is fantastic, the commentary by Larkin as interesting as always. My heart pumped, I was terrified and moved and fascinated - this is an extraordinary audio production and I am not at all surprised that it won such a big award.

A WONDERFUL recording with fascinating commentary

I absolutely love this recording of Frankenstein. Clive Hayward's narration is brilliant - and the commentary from Alison Larkin about Mary Shelley and the Rime of the Ancient Mariner is absolutely fascinating. This great classic is made utterly accessible in this wonderful 200th anniversary recording. Bravo!