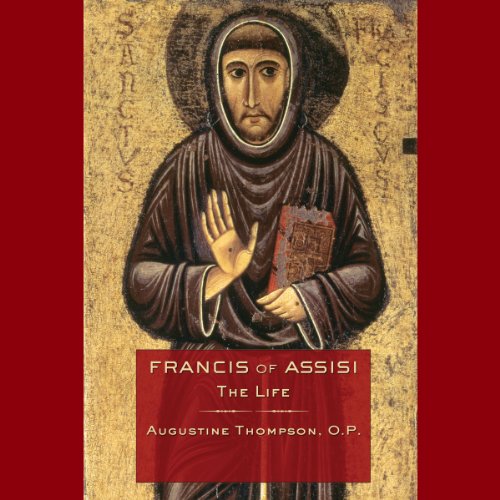 By: Augustine Thompson
Narrated by: Tom O'Malley
Try for £0.00

Among the most beloved saints in the Catholic tradition, Francis of Assisi (c. 1181-1226) is popularly remembered for his dedication to poverty, his love of animals and nature, and his desire to follow perfectly the teachings and example of Christ. During his lifetime and after his death, followers collected, for their own purposes, numerous stories, anecdotes, and reports about Francis. As a result, the man himself and his own concerns became lost in legend.

In this authoritative and engaging new biography, Augustine Thompson, O.P., sifts through the surviving evidence for the life of Francis using modern historical methods. The result is a complex yet sympathetic portrait of the man and the saint. Francis emerges from this account as very much a typical 13th century Italian layman, but one who, when faced with unexpected crises in his personal life, made decisions so radical that they challenge his own society - and ours. Unlike the saint of legend, this Francis never had a unique divine inspiration to provide him with rules for following the teachings of Jesus. Rather, he spent his life reacting to unexpected challenges, before which he often found himself unprepared and uncertain.

The Francis who emerges here is both more complex and more conflicted than that of older biographies. His famed devotion to poverty is found to be more nuanced than expected, perhaps not even his principal spiritual concern. Thompson revisits events small and large in Francis's life, including his troubled relations with his father, his contacts with Clare of Assisi, his encounter with the Muslim sultan, and his receiving the Stigmata, to uncover the man behind the legends and popular images.

What listeners say about Francis of Assisi

Sceptical without being cynical. Scholarly but accessible. Respectful but not reverential. Warm, not sentimental. Perfect.

No greater man ever lived than Francis Bernadone who eventually became Saint Francis of Assisi. The world of today needs Francis and his example more than ever!

This is a wonderful and interesting biography of St Francis that isn’t afraid to address some of the myths that have grown up about him. The performance is excellent. Very inspiring, too!
Highly recommended!

The reader was so-so - not bad, but also sort of droning and not particularly good. His pronunciations of out-of-the-way words tended to be free-form and were often wide of the mark. Couldn't he have at least taken the trouble to look them up on the internet? (Examples: words like "Aristotelian", or anything in Latin.)

My biggest complaint, something that will bother some people more than others, is that background music started playing while he was reading the last 30 seconds or so of each chapter. I'm baffled why production companies do this. It dramatically changes the listening experience, and makes it difficult to comprehend what the reader is saying. It's like having your restaurant waiter stop by the table towards the end of your meal; he reaches over you and pours perfume on your last three bites of the (previously) delicious entrée. Yum! Or turning on the overhead lights at the movie theater during the last 30 seconds of the movie, before the credits start to roll - just to make sure you were aware it was about to end. Weird!

Excellent. Makes St. Francis human. Although skeptical of the hagiography of the past and I don't agree with all of the author's interpretations of facts presented (but he does present the facts which gives the reader space to interpret the events), it is a work that inspires faith, hope, and charity. It reveals with Francis' own words and instructions great insight into Francis as a true son of the Church with supreme Eucharistic devotion and respect for the sacred offices of the clerics and priesthood.

This is a wonderful portrait of the real Francis who became Saint Francis of Assisi that digs beneath the legends to reveal all the complexity of a real human personality. It explains the twists and turns of his personal life and his experience of navigating the unexpected responsibility and leading and caring for his brothers. If you want to get to know St. Francis, buy this book.

I just finished "Francis of Assisi: The Life" by Augustine Thompson. This was a short book, just at 200 pages, and although it occasionally delved into nuanced theological and historical questions, it is quite accessible for everyone.

There were three major takeaways for me with this book.

First, trauma builds prophets. Francis lived his early life comfortably among the aristocracy of Assisi as a wealthy merchant's son. Although he was known for generosity to the poor and some level of piety, it wasn't terribly notable. It was not until 1202, when Francis participated as a soldier in a military campaign, that his life changed. This campaign was a horrendous failure, and Francis watched good friends die on the battlefield before he suffered a year imprisoned under poor health. This trauma, similar to PTSD pushed him towards the radical, and it seems he continued to struggle with this trauma throughout his life.

Two, it is ok to be uncertain. Francis shows us that the fragmentation of identity and belief is not just a post-modern event. Francis was constantly torn between different realities. He wished for simple humility, but instead was thrust into a leadership position. He wanted submissive lay piety, but Pope Innocent III made him a preacher. He desired personal poverty, but compassion for the poor and sickly required resources to care for them. Nature held beauty, but it also tormented him with ailments and vermin. These conflicts led to contrary and ever-changing rules and beliefs throughout his entire life. And yet, through this conflict and uncertainty, he was still an effective man.

Three, believers craft saints, not human beings. As Thompson artfully points out over and over, Francis was being remade into a saint, miracle-worker, and typology of John the Baptist and Jesus before he died and against his will! Did Francis really have stigmata? Did he perform miracles? Could he command wolves to obey him? We do know from eye-witness material that Francis had wounds imitating the Passion, was given credit for healings, and he seemed to have a unique ability to gain the trust of animals. But this does not make a saint. Instead, Francis was integrated into the historical milieu of his day, creating a Francis of myth which took the place of the human being who actually existed. Today, we do the same thing, creating "Francis the Environmentalist," "Francis the Communist," or "Francis the Mystic," figures who are not at all like the Francis of Assisi.

This was an absolutely wonderful book. My only serious critique would be that Thompson seems to, ironically, introduce a dichotomy similar to the "Jesus of History and Jesus of Faith" into the discussion, framing Francis as a modernist typology for Christ! But, despite this primarily literary flaw, this is a masterfully researched and accessible book which I would recommend to anyone interested in St. Francis, church history, or practical Christian faith.