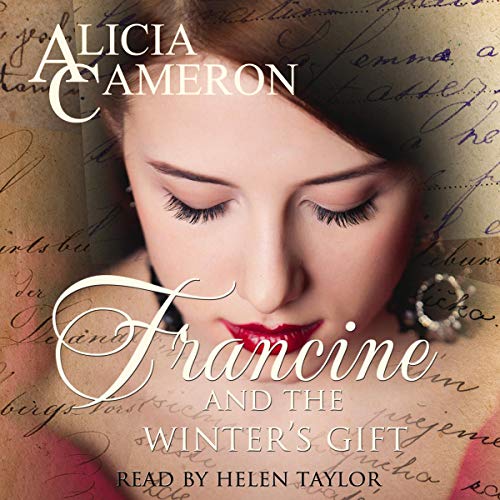 Francine and the Winter's Gift

By: Alicia Cameron
Narrated by: Helen Taylor
Try for £0.00

Francine is a heroine you will never forget.

At the age of just 20, Francine has been working for 10 years. From the meanest streets that Victorian London possessed, she traveled Europe, learning how to survive and even prosper.

Now back in London, in the new Edwardian era, she runs an agency saving young ladies from false suitors. With the help of her friends - ex-governess Miss Philpott, her footman fiancé Gilbert, and the feisty, tiny ex-kitchen maid Tilly - Francine changes all the lives she touches.

In an age where all power and money exists in the hands of men, Francine has refused to accept this for herself and her friends and leads the path to a more independent life. It is, she says, mainly a change in thinking.

One man, government minister Sir Hugo Portas, comes to Francine's office in a fury. She deals with him with her customary aplomb, but might she be brought to accept his help when an old enemy threatens her business and even her life?

Sir Hugo, for his part, is plummeted into a household where the maid is as important as the mistress. Music Hall stars rub shoulders with "little people", and he is treated with more contempt than respect. It is not what he is used to. But there is something so fascinating about Francine Lestrange...

What listeners say about Francine and the Winter's Gift

Age gap ruined this one

I can not recommend this book, a pairing where one partner is only 3 years older than the oldest child of the other partner does creep me out and I feel for the poor child. Also such an age gap does set the younger partner up for heart break at a lonely time in older age.

The message of the first two instalments was watered down, like you can be only so independent, but then have to pay a price. I would have preferred the price to be to shun marriage. Highly successful women like some Queens just did not marry because they did not want to give up their power and independence and today highly successful women more often than not might marry but never have children.

I did not regret buying
Francine and the Art of Transformation even though the running time is so short, it is an uplifting story.
(It contains
Francine (sold for a credit for 25 minutes!!)
and Francine 2 (Miss Philpot and the Fascinating Mathilde))
but not this instalment.

thank you so much

well done on yet another brilliant book. would recommend to others for sure. looking forward to listening to more . xx