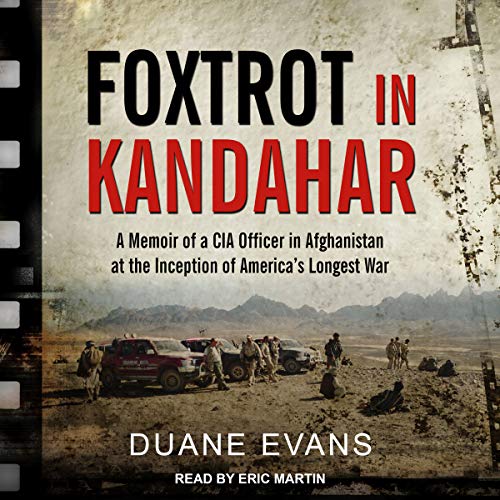 By: Duane Evans
Narrated by: Eric Martin
Try for £0.00

Kandahar. The ancient desert crossroads and, as of fall of 2001, ground zero for the Taliban and al-Qa'ida in southern Afghanistan. In the northern part of the country, the US-supported Northern Alliance (the Afghan organization opposed to the Taliban regime) has made progress on the battlefield, but in the south, the country is still under the Taliban's bloody hold and al-Qa'ida continues to operate there. With no "Southern Alliance" for the US to support, a new strategy is needed if victory is to be achieved. Veteran CIA officer Duane Evans is dispatched to Pakistan to "get something going in the South." Foxtrot in Kandahar is his story.

Evans' unexpected journey from the pristine halls of Langley to the badlands of southern Afghanistan began within hours after watching the horrors of 9/11 unfold during a chance visit to FBI Headquarters. It was then he decided to begin a personal and relentless quest to become part of the US response against al-Qa'ida. Evans' gripping memoir tracks his efforts to join one of CIA's elite teams bound for Afghanistan, a journey that eventually takes him to the front lines in Pakistan, first as part of the advanced element of CIA's Echo team supporting Hamid Karzai, and finally as leader of the under-resourced and often overlooked Foxtrot team.

What listeners say about Foxtrot in Kandahar

this was a great listen, superb story telling and great narration. written by a true patriot. book gives unique insight into the early stages of the initial stages of the Afghan war

Very captivating book that delves into CIA operations in Afghanistan. Well written with a clear and seamless storyline. I would pair this with other books written by Army Special Forces of the era (Horse Soldiers comes to mind) to get both perspectives (CIA & ODA). I suspect certain aspects of the story are missing, specifically regarding the recruitment and employment of assets and agents in theater. Still this book covers a remarkable story of CT operations prior and post 9/11.

The information was excellent and very good insight into events that took place following 9/11.

The delivery of the information was subpar. The narrator was overly dramatic with every sentence, which became frustrating and annoying.

Nice account of a CIA lead team into Afghanistan after 9/11. Quick read and would definitely recommend reading The Only Thing Worth Dying For first. Interesting side account of the agency's actions while trying to establish order and peace in insurgent ruled Afghanistan. If you have read TOTWDF it's a great companion piece.

Interesting...good story line. Believable...did not talk down to me. The reader was in good voice...perfect for the task.
The Afghan culture is not beyond reproach. This dark side is pertinent and should have been mentioned.

Thank you all for your good work. Especially you , Duane.

God, what an inappropriate narrator!

Want to hear a book read aloud by a whiney, bitchy version of Richard Simmons? You'll love this guy. If I were Duane Evans, I'd go back to Afghanistan and hide in a cave in Tora Bora. Don't the authors have any say in who represents them in a first-person narration?

The story was half interesting. What made it painful was the narrator. The narrators voice sounded like it was computer generated. I found it a bit annoying throughout the whole audiobook.

I really liked the book and narrator pronounced names correctly. gives a good view of how fragile things were in the beginning