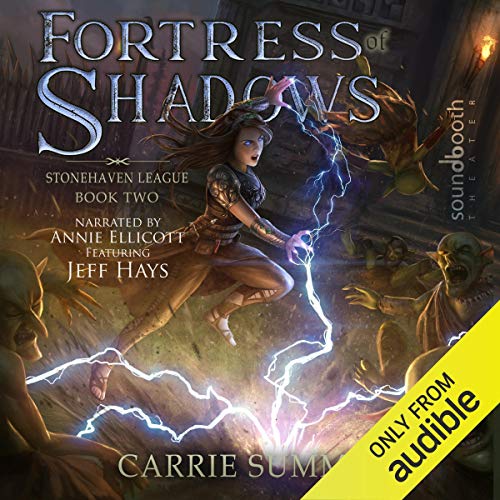 Fortress of Shadows: A LitRPG and GameLit Adventure

Fortress of Shadows: A LitRPG and GameLit Adventure

A giant telepathic parrot with a rather foul mouth, a horde of smelly goblins, and a tyrannical demon priestess…

During her first weeks in the deeply immersive VR game, Relic Online, she’s hacked out a home from a choking jungle, gathered a tribe of loyal followers, and earned a wisp stalker who insists she’s some kind of champion.

But Relic Online isn’t some wussy kids game, and there will be no easy-street cruising for Devon. Like a monk racking up combo points, the system opens a fresh offensive by crippling her most powerful ability. Following through, it strangles the village food supply, sends demons bursting through rifts in the Earth, and delivers a final, devastating throat punch by exploiting Devon’s worst fear.

The players have discovered Devon’s home. Now everything changes.

Another fantastic book in the serise, Carrie Summers has a brilliant take on litrpg, stonehaven league is fast becoming one of my favourite serise.

Devon had some hard choices to make bit as always she has her village and people best interest at heart, it was nice to see that Devon has met up with her friends from the old game.

The 2nd volume of this storyline had the typical sophomore faults. Yet the story is a good one. The Male narrator does a good job. find a new female voice for the lead, I believe the one being used doesn’t like the story. She’s reading poorly, and not performing to any believable standard. Too bad!

I just started the series and finished book one very quickly. I am enjoying the gameplay descriptions as well as the underlying plot both in and out of game. I will definitely keep listening and I hope they get the last two books recorded soon.

I Enjoyed the Book

As book two in the series, there is a lot more character development for Devon and others. I enjoyed the story a lot and the creativity with which Carrie Summers crafted it. Annie Ellicott and Jeff Hays, per usual, have a phenomenal performance. The story continues to progress somewhat slowly, but I was never bored. I would encourage continuing with the series.

if you liked the first book you'll like this one

very much a continuation of the first book. you won't be too surprised where it goes. fun and enjoyable

This was an improvement over the last installment, and the last book was already pretty good.

Loved this. I was sucked into the series immediately with book 1, and couldn't put book 2 down either. I even grabbed 3 and 4 for kindle, since they arent on Audible. At this rate I will finish 4 books in 4 days. A compelling adventure, a fantastic concept and an amazing world, end to end.

This well done continuation of the series introduces two new players, along with new NPCs, and a complicating IRL situation. The performance is excellent.

As the first book deserved 4 stars, so does the second. I had hoped it might jump to five, but it’s not quite there yet.

Carrie Summers' Stonehaven League books have the perfect amount of character sheet / mechanics for an audiobook. Enough to enjoy geeking out over some stats and abilities (and settlement building!), but not so much that they meld into a droning litany of numbers. I wish the next two books were on audiobook already. I'll probably read the ebooks because I needs me some more Stonehaven, but I'd strongly consider still picking up the audiobooks when they become available, particularly if the same narrators are used. This is turning into my favorite LitRPG series. Love the game world, the balance between settlement building and exploring, and the AI's wry sense of humor!

Devon's world does sound rather interesting, I would personally love to get lost in Relic Online. So onwards and upwards.