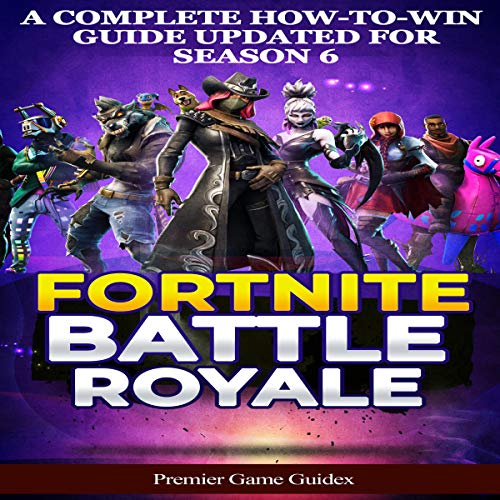 By: Premiere Game GuideX
Narrated by: Thaddeus Walster
Try for £0.00

In this book, we will be teaching you how to win in Fortnite’s Battle Royale Mode as a solo, duo, and squad and all especially updated for the season six changes.

At the end of season four and beginning of five, there were rifts created in the sky by a rocket launched from the Evil Lair. These rifts, which are not much rarer, can be used to teleport you into the sky, allowing you to fly away from danger. Then, season five was amazing as expected; it included the addition of Viking characters and a Viking village stranded on the top of a mountain and other warrior characters to play at. There was also the biggest change; the addition of the area that consumes one-fifth of the map now, Paradise Palms, and the amazing golf carts. At the end of Season five, we saw a large bolt of energy come out of the main rift in the center of the sky created in Season four and pull a mysterious purple cube from the ground. The context for Season six was revealed.

This book is well written by the author. It provides a lot of great tips and guides for anyone interested to learn more about this game. Highly recommended!

I hope you will be really enjoy reading this book.

I hope you will be really enjoy reading this book. Bought for my teenager since he loves Fortnite and he loved this book! Thanks the author.


An interesting book. I have found this book interesting and fun. If you want to learn all tips and tricks then you should read this Fortnite guide. I'll most likely prescribe this book to my loved ones

WOW!! If you want to know about Fortnite battle r


WOW!! If you want to know about Fortnite battle royale, it actually helps any beginner get his computer set up for this game. The points listed and explained have been very helpful. It worth it.

Very good book about fortnite teens.I grab this book for my kids.They are fan of fortnite.The author did an excellent job also written very well.Worth to buy it.

Really this is a best helpful gaming book. I highly recommended for anyone.Worth to buy it.

This is an educational thought direct about fortnite for Teens. I like this book for my youngster. He get and extremely glad from this book rule.


Fortnite is such an addicting game but I am not very good at it. Hoping these tips will help me out.

I’m very happy after read this guide. Even though I’ve been playing Fortnite for a while now, these tips really helped me out. Highly recommended!