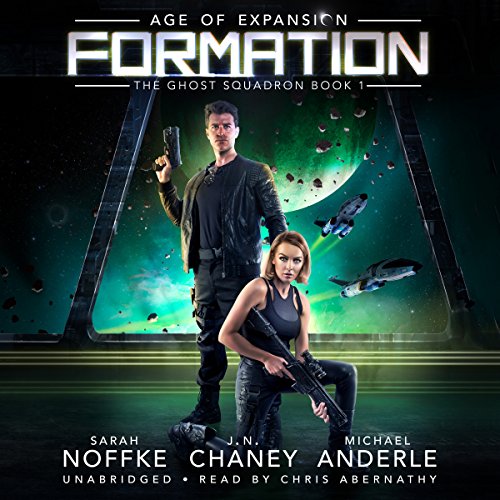 Kill the bad guys. Save the galaxy. All in a hard day’s work.

After 10 years of wandering the outer rim of the galaxy, Eddie Teach is a man without a purpose. He was one of the toughest pilots in the Federation, but now he’s just a regular guy, getting into bar fights and making a difference wherever he can. It’s not the same as flying a ship and saving colonies, but it’ll have to do.

That is, until General Lance Reynolds tracks Eddie down and offers him a job. There are bad people out there, plotting terrible things, killing innocent people, and destroying entire colonies.

Someone has to stop them.

Eddie, along with the genetically-enhanced combat pilot, Julianna Fregin, and her trusty E.I. named Pip, must recruit a diverse team of specialists, both human and alien. They’ll need to master their new Q-Ship, one of the most powerful strike ships ever constructed. And finally, they’ll have to stop a faceless enemy so powerful, it threatens to destroy the entire Federation.

All in a day’s work, right?

Note: If cursing is a problem, then this might not be for you.

What listeners say about Formation: Age of Expansion

Read the book or ebook, the narrator screams for speech and makes no distinction between male and female characters. The story itself was quite good though. Sadly I won’t read any further as I ran out of aspirin lol

the story was descent from what I heard, but I couldn't get past the voice actor. it's a book I think I'll have to get and read, I tried here for about 2 hours and the voices made it really hard for me to connect with the characters or the story.

Kurtherian Gambit Series, with all the trimmings.

If you don’t like the Kurtherian Gambit Series, or kicka$$ characters, or lots of action then this book is not for you. BUT, if all of this and more sounds interesting, then this new series is just what you are looking for. Early in the book we hear: “You did well, Captain, but you’ll need to be even better. Understand?” Old friends and new characters headline this book where politics be damned, the Federation will be protected even when it can’t be done in the open. New hi-tech? Check. Space ships? Check. “I need you at your peak, son; I can’t stress that enough.”

I love the new series and hope Ricky Bobby makes an appearance. I do not, however, like Chris Abernathy for any Kurtherian Gambit book/ series. IMO he ruined The Dark Messiah series and he is not doing any better with these. Apparently he just can’t swing a female voice. This makes it very difficult to know who is speaking. Additionally his male voices aren’t even good. Hate to say it but Emily Beresford and Kate Rudd have better male voices. I will probably continue to listen just because I want to “read” all of the books, but please no more Abernathy for Kurtherian Gambit.

It's fun to hear how names and places are pronounced. whenever I go back and listen to the stories on Audible I catch a lot of things that I missed when I read it the first time through. it's a lot of fun to hear the right way to pronounce all the words but I so badly screw up. this story was fun to hear and I thought the gentleman did a very good job thanks everybody love it

Was worried when I read the reviews griping about the narrator and then (and still) don't understand the word 'opera' in referring to this series. I hate audible books that have music and sounds that are not like someone reading a book. I return them without further enduring the torture. But, I really like the other books Sarah Noffke has written and decided to take a chance. This book is a treasure. The story and characters are memorable and the book is hard to "put down". The narrator is great. Do not understand the review I read that said otherwise. Absolutely loved this book and can't wait to continue the series!

I recognized the name Edward Teach as Blackbeard immediately. But I am a naval history nerd.
Of course the real Blackbeard was a psychopath, not a hero. To turn him into a hero is a challenge for us history nerds. So far, so good. Keep up the good work

I Can't Believe Just How Bad This Audio Book Is

If your idea of a good read is a cartoonish story about a loud, obnoxious, immature, and over the top bratty 10 year old in a mid-twenties man's body dropping an endless stream of F-Bombs and somehow saving the universe almost single handedly then this story might be for you. If you like your protagonists to be believable, your bad guys to have a higher IQ than a cabbage, and your stories to make sense then it's probably not for you.

I am not one for opera anything but this is a great audio, it had action, suspense, and twists and turns, but it also had humor and that was awesome! I have been a fan of Sarah Noffke for quite some time and a off and on fan of J.N. Chaney as well but Michael Anderle is new to me and I think I will be look for some more of his book/audios as I can. Chris Abernathy also had a big part in making this audio so great, he is a wonderful narrator and I hope their partnership lasts as he made Eddie who he is and made Pip so awesome. I really hope they come and recruit me as I wouldn't even think about it I would go in a second.

Solid start to the series

This is a solid start to the series, and has a good epic space opera vibe. It felt as though this book is setting the stage for the broader sweep of the series. I didn't read the other books in this Universe, so I'm coming into it new. We get introduced to our main characters but they felt a bit under-developed (that may be because I am new to this verse). I trust that the characters will grow as the series progresses. With the unfolding plot against the Federation there are plenty of places for the places for the Crew to go.

The narration of the audio is decent but had a few things that didn't work for me. I did have some trouble distinguishing between the male voices at times. It is a personal preference but I like a broader range of voices or accents when there is an ensemble cast of characters. Also, I felt the pacing of the narration was off at times. Sometimes the narrator added hard breaks at the end of sentences rather than allowing it to flow more naturally. But this book still lends itself well to audio and I will give the next audio in the series a chance.

Overall, this is a good introduction to a new series within an existing story-verse. And it's worth giving the next audiobook a try.