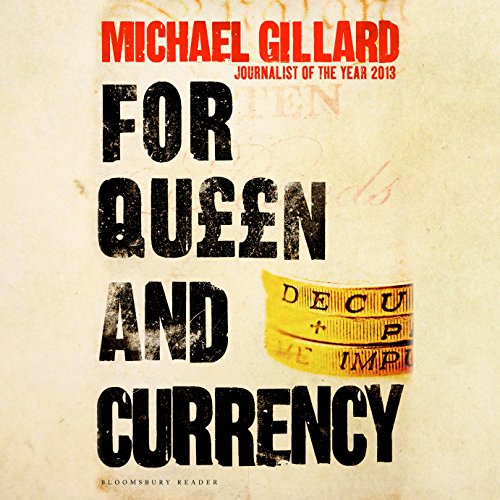 For Queen and Currency

By: Michael Gillard
Narrated by: Colin Mace
Try for £0.00

In For Queen & Currency, investigative journalist Michael Gillard exposes a massive fraud and security scandal at Buckingham Palace that Scotland Yard and the Royal Household tried to suppress. Drawing on thousands of leaked documents and police sources, Gillard tells the inside story of a group of Royalty Protection officers who entertained a life of high-risk gambling, brown envelopes of cash, and striking gangsta poses on the throne of England while supposedly guarding the royal family and their secrets from terrorism and press intrusion.

Paul Page, a young Royal Protection officer turned degenerate gambler, ran a hedge fund for cops during the credit and property booms. His Currency Club bet millions on movement in sterling and gold and paid investors returns beyond the dreams of avarice and financial logic. As word spread to other royal palaces, more protection officers and their friends piled in with savings and cheap loans from banks, many of which were running their own Ponzi scams. Page was hiding huge gambling losses, and when the returns dried up, a hit man threatened his family, sending the royal cop over the edge and on the rampage with a gun.

Scotland Yard tried to spin the scandal to divert attention from its own regulatory failures. But Page refused to go quietly. His sensational trial became an arena to expose the so-called elite Royalty Protection squad and the private life of a senior royal. "The queen is going to be mightily pissed off," he warned. "[There was] an agreed understanding that what happened at Royalty stayed at Royalty." Not anymore.

What listeners say about For Queen and Currency

Felt as though this had great potential as a story but chapter after chapter of the same narrative on the complex gambling operations became too boring to finish it as lost interest in the character. Could of been done with 1 chapter.

Very simple story of greedy stupid people who lost lots of money.. Could have really been a 2hr book but really dragged out by the same repetitive narrative of people wanting big returns for no effort and blindly accepting lies and promises.. So glad I didn't waste hours reading it waiting for a twist or surprise...

The guy who reads it is great, lots of different voices. Very talented. The story is good but too many numbers. Could be shorter and still capture the essence without all the quoted figures.

Good insight into the world of Royal protection police officers and the idiocracy of financial gambling by all who want to get rich, quick.