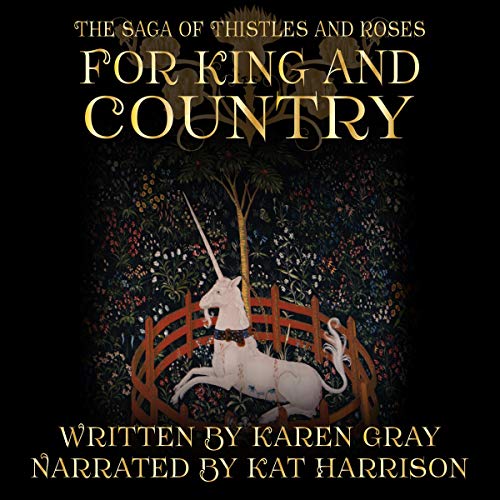 For King and Country: The Saga of Thistles and Roses

Mòrag's world is one of proud magical creatures and fierce armies bristling with steel and sorcery. Welcome to 27th century post-apocalyptic Scotland; where immortal beasts roam wild in the countryside, mighty princes battle for power, and the common folk do their best to avoid being trampled in their wake.

Born of a forbidden coupling between the Albannach and Sasannach royal houses; Mòrag is destined to rule. But her birth right has been kept secret - even from her, and discovery of her royal blood could cost her life.

Mòrag is no ordinary girl. Her royal blood's hidden talents begin to reveal themselves during her military training at Sruighlea Castle, and she is suddenly in a lot more trouble than she ever dreamed of.

Mòrag is about to enter a brutal world of conflict and turmoil which will challenge everything she knows and believes in.

What listeners say about For King and Country: The Saga of Thistles and Roses

An absorbing modern fantasy tale which is really brought to life by the narration - I almost feel like I'm in a highland glen listening to it!

Loved this book, it captures you from the very first chapter, i can't wait until the 2nd book comes out, as it leaves you on a cliff hanger.
The Auther has brilliant imagination. The narrator brought out the best of this book.
what a great combination they make.

If you are looking for a rather unique post-apocalyptic tale minus the zombies, shotguns, gas cans along with other such genre tropes, you may have found your next listen in this audiobook. If you enjoy stories containing Scottish folklore where society, as we know it today, has returned to a near medieval or fantasy flair, again this book series may be one for you to have a deeper look into. “For King and Country: The Saga of Thistles and Roses” is the first book, of five, in the “The Warrior Queen” series written by Karen Gray. At the time of this review, only the first book is available in audiobook format on Audible. The audiobook’s narration is well performed by Kat Harrison who appears to be a newcomer with four total audiobook narrations on Audible at the time of this review.

For me, I overall enjoyed the book. I was afraid the story would simply be another young-adult (YA) coming of age tale based on the authors summary, but it was more than that. The writing was solid and felt mature even though many of the characters were quite young. The story had great world building and the scenes were well described. It contained exclusive twists by blending post-apocalyptic, fantasy, and superhero powers along with the limited use of modern-day technology. At times such technology seemed foreign to this fantasy-ish world and it would throw me a bit every time it occurred. But be aware that such tech was used sparingly. I quite enjoyed the rather fun animal companions (unicorns, birds, wolfs, etc.) and the interesting communication between their owners while in battle and out. A few times I struggled with the narrator’s Scottish accent (more below in narration section) along with a couple of places where I because lost in the story requiring me to find my way back. There is mystery, suspense, action, and even some romance all wrapped up in this over nine-hour tale.

The opening of the book was powerful and emotional and really something that sets the pace of the story from start to finish. The author drops you right in to plenty of action and intrigue. From here, the story begins to unfold, and we see the various waring factions training up their sides for battle. Not only do you have your typical physical military being strengthened, but there is also a mental power that needs to be harnessed as well. There is plenty of banter between the various characters which is something you would expect from a group of younger soldiers. As I mentioned previously, the book has a number of younger main characters, but the writing did not feel young adult to me. The core characters had depth and dimension to them where as some of the more side characters were rather flat. There was some background material on a few of the key characters, but I wanted to know more of what drove them, their likes, dislikes, etc. I desired to feel the pain they did and for me it was a bit lacking. I would have also like to have had more emphasis on the various kingdoms and their reasons for being, etc.

For me, it is critical that the audiobook be narrated cleanly, clearly, and with proper emotion. When I first started listening, I was captivated by the rich Scottish accent of the narrator and I was hooked. I will also say that this same accent, which I loved, was a hindrance for me as well. Let me explain. I often listen to an audiobook at a faster speed than normal. Yet, with this audiobook, I was required to listen a near the regular speed for proper comprehension. The audiobook’s narration was overall clean and clear of any major audio artifacts. In a few places I noticed slight volume inconsistencies along with a single overdub spot, but these were very limited and did not take away from the book’s enjoyment. In future books, I would like to have more life given to the characters from the narrator. I would have like to have had more emotion, personality, and feeling. The narration was not bad and I’m sure as the narrator gets more books under her belt, this will come more naturally.

For parents and younger readers, the book does contain a few uses of modern vulgar language; which for me seemed out of place for this time period. There are a few places containing sexual references and innuendos along with some light scenes containing alcohol use. I felt there was a fair number of rather graphic scenes of violence (near torture) which may not be appropriate for young readers. Although it is part of the plot and story, there are also a few places of animal cruelty. None of this I would consider excessive but be aware that they are present in this story. I would put this book alongside others such as Harry Potter, Divergent, and the like for violence and more targeted at mature listeners.

In summary, the book was enjoyable even with a few of the issues with the story and narration. I liked the world building and main characters interactions yet would have like to have had more time spent on the background of the factions. Maybe this information is provided in future books of the series. I feel it is a strong start to a series and worth the credit if you are a fan of sci-fantasy books. Only one book is currently available in audiobook format, yet the rest of the series is complete and available in print or digital formats if you did not want to wait for the rest to come to audio.

Disclaimer: this audiobook was provided by the author, narrator, and/or publisher at no charge in exchange for an honest review.