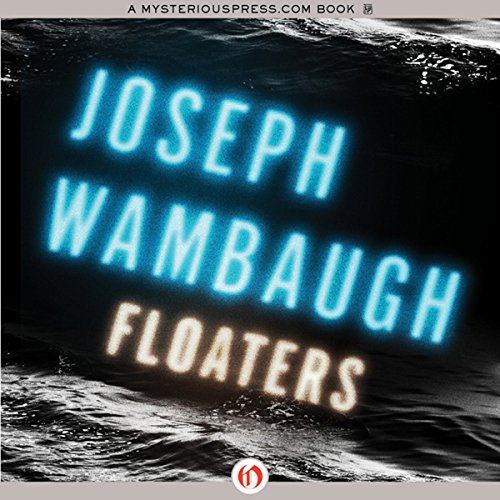 Who else but Joseph Wambaugh could write "a joy, a hoot, a riot of a book" that is also acclaimed as "one of this season's best crime novels"? That's how The New York Times Book Review and Time, respectively, described his last novel, Finnegan's Week. Nobody writes a faster, funnier, more satisfying tale of cops and criminals, the high life and lowlifes that Wambaugh - and Floaters is his sharpest yet.

Mick Fortney and his partner Leeds manage to cruise above the standard police stress - pools of coffee and Pepto-Bismol - they're water cops in the "Club Harbor Unit", manning a patrol boat on San Diego's Mission Bay. A typically rough day's detail consists of scoping out body-sculpted beauties on pleasure craft, rescuing boating bozos who've run aground, jeering at lifeguards, and hauling in the occasional floater who comes to the surface.

But now their days are anything but typical, because the America's Cup international sailing regattas have come to town and suddenly San Diego is swarming with yacht crazies of every nationality, the cuppies who want to love them, and the looky-look tourists, racing spies, scam artists, and hookers who all want their piece of the action. It's the outstanding body and jaunty smile - full of mischief, full of hell - of one cuppie, a particularly fiery redhead named Blaze, that gets Leeds and Fortney's attention. First Leeds drowns in frustratingly unrequited boozy love from afar. Then, with her increasingly odd behavior, Blaze tweaks every one of their cop instincts, alerting them that something's not quite right on the waterfront.

Indeed, Blaze will soon lead Detective Anne Zorn and Mick Fortney along a bizarre criminal trail that would be hilarious if it didn't wind up just as nasty as it gets, with a pair of murders right on the eve of the biggest sailing race of all.

Filled with all of Joseph Wambaugh's trademark skills - laugh-out-loud writing, crackling dialogue, outrageous excitement, and of course, plenty of raunchy veteran cops who leap off the page - Floaters is Wambaugh at the very top of his form.

What listeners say about Floaters

Poor reader ruined this book for me

Would you consider the audio edition of Floaters to be better than the print version?

All of it! Monotone not interesting no intonation

Extreme yes! Did not listen to it beyond first chapter

Our family was going to listen to this on our long drive down to San Diego. It was too raunchy to do that. While the author made some interesting points about the main character loving/obsessing over the America's Cup to the point of sexual fantasy the language throughout the whole book was vulger and unappealing. Maybe the misagonistic language and characters were realistic, I just didn't enjoy them. The story line and the America's Cup background info kept me interested and listening to the book. Didn't like the reader either. Some of the characters were given southern accents in a story based in San Diego.