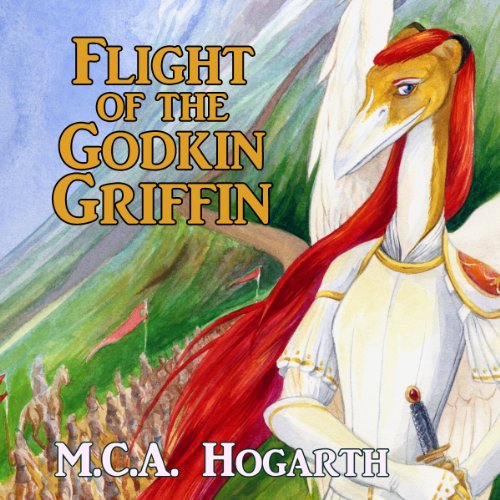 Flight of the Godkin Griffin

Flight of the Godkin Griffin

By: M. C. A. Hogarth
Narrated by: Jean Ruda Habrukowich

On the eve of her retirement from the army, Mistress Commander Angharad Godkin finds herself re-activated and directed to replace the governor of the newly conquered territory of Shraeven. With its multitude of diverse societies and religions, the province will not be easy to tame; but Angharad has thirty-four years of experience and is determined to succeed - even with the additional challenge of an ex-lover as her second-in-command.

However, what starts out as a seemingly predictable military challenge takes multiple unexpected turns at the hands of Shraeven's rebellious people, their unorthodox beliefs, and their capricious, demanding, and very tangible gods. Angharad quickly finds herself the central piece in a game being fought on too many levels, all of them very foreign to her nature and background.

But if she's being forced to play, she's going to play to win; and Shraeven may come to regret having gotten her into the game.

Book 1 of 2 of the Godkindred Series.

When gods play chess, the pieces are alive

As fantasy worlds go this one is a little off the beaten path. It shows us the hubris of ego and the hubris of dynasty. The edges start out a little familiar. Military life, packing down, ready to stand down.

Then it goes someplace far different. The story takes a glancing blows at several tropes, Military Conquest, Social Assimilation, even Colony At Risk... These and a few more all thrown into the literary blender.

The result is a smooth look at a well constructed world where a hardened, smooth shellac of 'Civilization' hides a gathering of well scabbed over political and religious undercurrents that are anything but civilized.