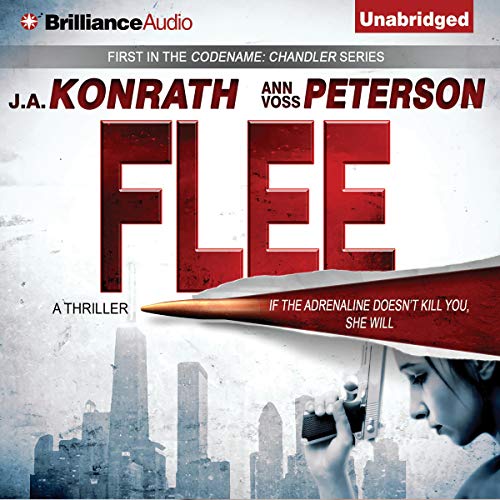 By: J. A. Konrath,Ann Voss Peterson
Narrated by: Angela Dawe
Try for £0.00

She's an elite spy, working for an agency so secret only three people know it exists. Trained by the best of the best, she has honed her body, her instincts, and her intellect to become the perfect weapon.

Then her cover is explosively blown, and she becomes a walking bulls-eye, stalked by assassins who want the secrets she holds, and those who'd prefer she die before talking.

Chandler now has twenty-four hours to thwart a kidnapping, stop a murderous psychopath, uncover the mystery of her past, retire five highly-trained contract killers, and save the world from nuclear annihilation, all while dodging 10,000 bullets and a tenacious cop named Jack Daniels.

Buckle up. It's going to be one helluva ride.

What listeners say about Flee

The pace of this book is excellent, and the story is engaging, albeit a bit overdone.

But holy crap, who hired Angela Dawe as this narrator? I almost can't follow the story because she's so monstrously bad. I'm shocked to see how many books she's narrated. I don't know how anyone can stand to listen to her.

Hear for yourself. Listen to the sample. Unless it's a question (or unless she's speaking for another character), her intonation is exactly the same (especially the END of every sentence), no matter what the context.

And she clearly punctuates her sentences with pauses so that you get the full impact of each annoying repetition in the way she speaks. I find myself wishing she'd just run two sentences together so I wasn't drawn into to focus on her nightmarish delivery.

Everyone's different. If her delivery doesn't bother you, get this book. It's almost too much for me to bear.

One of the worse narrators ever.....

Would you try another book from J. A. Konrath and Ann Voss Peterson and/or Angela Dawe?

No, I won't. The narrator was so bad - I couldn't enjoy the story. It's a shame because this might have been a great book.

Sorry, I never made it to the end.

Who would you have cast as narrator instead of Angela Dawe?

Anybody but her.....seriously, a cat could read this novel and put more in to it.

What character would you cut from Flee?

No clue....again, couldn't get past the awful narration.

Try a different narrator and I might re-visit this book.

Situations within the book conflict with themselves, i.e. a women in her early 30s having a lover from 20 years ago.

Has Flee turned you off from other books in this genre?

Some sense of realism, no attempt at all to make situations even seem plausible.

The performance was fine

If you could play editor, what scene or scenes would you have cut from Flee?

Since, I like the Jack Daniels series, I will continue to read the book series.

Very typical of the genre except way to many captures and hardly believable escapes by the protagonists.

J.A. Conrad is one of my favorite authors, yet with this book something went terribly wrong. It is flighty, the plot hard to grasp and follow. I felt I was in a hallucinatory state. After suffering through about a quarter of this crazy ride I gave up to preserve what sanity I still possessed.

What other book might you compare Flee to and why?

I don't generally listen to 'spy' or 'assassin' stories so this is a new one for me but I enjoyed the ride.

What does Angela Dawe bring to the story that you wouldn’t experience if you just read the book?

I liked her as a narrator for the story. I haven't heard her before and I didn't come into it with any preconceived notions about what Chandler would sound like.

I don't know if I could have listened to it in one sitting. There is a lot of jargon used at times and I kinda tuned out during some of it which means breaks were needed.

Overall I enjoyed this book and will be listening to more in the series.

good book to listen to. listened to kc and back home. i dont go anywhere eith out a boom

Narration was good. I will listen to the other books in this series. It sounds like it will be good tio