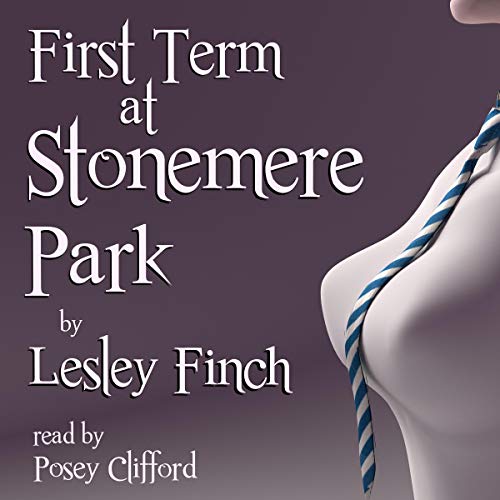 When bright, pretty 18-year-old Stephanie begins study at Stonemere Park Girls' Grammar, she finds she must adjust rapidly to the college's unexpectedly liberal attitude towards sex. And then there is the small matter of her breasts having grown by eight cup sizes practically overnight.

What listeners say about First Term at Stonemere Park

I bought the Audible version of First Term even before finishing listening to Prime Assets, also by Lesley Finch.

I'd already read the text version but listening to Catherine Carter's interpretation of Prime Assets convinced me to get my hands on this version, read by the equally beautifully voiced Nicky Delgardo.

Nicky has a lovely reading voice well suited to the role of Stephanie Fox and her classmates at Stonemere park.

The story is great. The narration is great. It's a very well written story full of fun and wall to wall huge boobies! What's not to love?

School was never like that when I was young!

After indulging in Finch's masterful 'Uschi' trilogy and loving every bra-stretching syllable, I decided to try the 'Stonemere Park' series.

I'll simply say this. In addition to being populated by a cast of superbly over-developed busty teen schoolgirls (and a few boob obsessed men), the story is surprising smart and suspenseful. What we have is a perfect blend of 'coming of age teen drama' and 'classic who-dunnit mystery'. Very entertaining on all fronts. Also, wall to wall teen mega bosoms.

My favorite character, other than our fetching protagonist Stephanie, was the lecherous, serial groper/humper French teacher, Monsieur Prevert. I wonder if I'd act any differently if I was daily surrounded by buxom teen beauties.

Also wonderful was the cameo by Nina Bridges. If you are a Finch fan, you'll know who she is and and love her contributions to the story.

The ending scene was nothing short of a masterpiece. Finch builds the drama, ups the stakes, assembles all the characters together somehow and brings the story to a very literal Climax you won't forget anytime soon. Well done!

With the encomiums out of the way, I reluctantly come to what I didn't care for. Narrator Nicky Delgado has a lovely voice with a perfect accent that is just posh enough to carry our main character, Stephanie, through the story. But Delgado's range as an actor is very small, with virtually no distinction between characters. She doesn't convey the boob obsessed relish of Finch's prose, and there was virtually no passion in her reading of the most novel's 'explosive' moments. And I can't neglect pointing out that Delgado mispronounces quite a few words. In all, Ms. Delgado could've been the perfect narrator for this novel with just a bit better direction, and a bit more enthusiasm.

I'm still glad I bought this audiobook because I am a fervent fan of Lesley Finch, but I wish Delgado was just more invested in the narration.

Despite the criticisms, I still rate the audiobook highly and I plan on giving the other 'Stonemere' audiobooks a try. Perhaps Ms. Delgado was just warming up with this one.


UPDATE: I got a notification on the author's Twitter page that this audiobook had been re-recorded with a different narrator. I popped back in the give it a try, and was delighted to find my copy was automatically updated.

We now have Posey Clifford, the talented narrator who has been doing such great work with Lesley Finch's other books, narrating this one.

Initially, I was only going to listen to my favorite scenes, but Clifford did such an amazing job with the characters, that I ended up listening to the whole book again. THIS is how it was meant to sound. Charming, distinct characters, scenes crisply narrated, all the drama, tease, and glorious descriptions of big bosomed teen beauties.

As usual, I laughed out loud a few times. What we have here is not just an accomplished narrator, but a fully actualized actress. Top notch entertainment. I can't get enough of Finch and Clifford. Match made in Heaven.

The return of the "guilt " free romp

Promising first volume and a story that can continue further development in an interesting entertaining way. Will definitely be listening to the next story.

Delightful romp for the breast fetishist!

If you have a fascination with large breasts, you will find this delightful tale right up your alley. I found listening to this to be actually a lot of fun. I think Nicky Delgado did a fine job with almost all of the narration. I found her English school girl narration to be spot on. I'll admit I'm an American, though, so what do I know.

What drove me nuts, was her French narration. I did take French in school, and it's obvious that the narrator didn't. My guess from her pronunciation is that she studied Spanish. In any event, a fair amount of this book takes place in French class or with the French language professor. Knowing that, her ability in French should have been a factor in her selection as narrator,

Nicky Delgado's English abilities, however, are first rate. All told, a very sexy and interesting listen, if you can put aside the French.