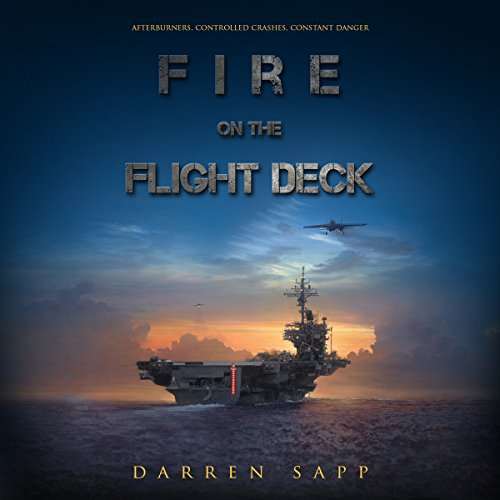 Fire on the Flight Deck

By: Darren Sapp
Narrated by: Patrick Freeman
Try for £0.00

"Fire on the flight deck!" Ominous words when living on an aircraft carrier hundreds of miles at sea. An American supercarrier flight deck is considered by many to be one of the most dangerous places on Earth; multi-million dollar aircraft launching, landing, and taxiing in the space of a few football fields, all orchestrated by a control tower and flight deck crew whose average age is 19.

During the Cold War of the 1980s, this massive ship provided the largest, mobile weapon in the United States arsenal, instilling fear and respect among opposing forces. While the supercarrier can deliver an awesome display of firepower, it carries an inherent danger for those who fly and work among the aircraft.

Brian Donley survived boot camp and completed aircraft firefighter school to serve as a yellow shirt on the flight deck of the USS William Halsey. Would his training, will, and courage equip him for the most challenging day of his life?

Darren Sapp's breakout novel delivers the sights, sounds, and action of a supercarrier. He served in the inaugural flight deck crew of the aircraft carrier USS Theodore Roosevelt as a crash crew member and yellow shirt aircraft director.

What listeners say about Fire on the Flight Deck

There are numerous stories about recruits joining the military, going through boot camp and then embarking on some great adventure, usually a war. Some are excellent, all slightly different. What makes this one exceptional is that it has been based on the real life experiences of the author who chose, rather than write an autobiography, to give a fictional rendering of his early naval career in the dangerous environment of the flight deck of an aircraft carrier. His dedication alone indicates the danger of the job - to two colleagues who died.
It is unusual, too, in not putting his ship into an attack situation, no enemies or aliens besiege his craft. Not needed: the universal enemy of fire out of control where there is no way to run is terrifying enough. Starting at an easy pace, the book is fascinating by detail given about the main character', Brian, signing up whilst still at school, being put through training and skillfully picturing the others who trained, then later worked, alongside him: friendships formed and odd grievances held. After all, as he says, "We were 19. We were bad." But working on the flight deck they had to grow up fast. The latter part of the book equals, or surpasses, any other fictional military battle i have read.

The whole is beautifully related by Patrick Freeman, who becomes Brian, the teenager turning into man on board the USS William Halsey in 1987. Freeman's steady narration is perfectly paced and matched to the text, his rendering of other voices also distinctive and fitting. His performance enhances this emotionally charged and detailed story.

My thanks to the rights holder for gifting me my copy of Fire on the Flight Deck, via Audiobook Boom. I had expected it to be interesting. I had no idea how much this book would absorb me. "Every day might be our last on earth". We would do well to remember this and those people who do their very best to ensure that others can live, even at the expense of their own lives.
My compliments to the author for this fascinating, exciting and well written book.

A very personal tale for me

I have a daughter serving on the USS Carl Vinson at the time of this review, so when I saw this book up for grabs I jumped at the chance. I was never able to get inside what my daughter experienced in boot camp all the way up until the assignment on her carrier, so thought this would be a nice inside look into what goes on.

Right off the bat, Mr. Sapp tells the listener that this is a work of fiction, that even the carrier in this book does not exist, but that many of the technical things are based off real life. In spite of that warning, I kept forgetting this was fiction. My mind kept slipping into an misunderstanding that this was a historical non-fiction book told from the viewpoint of Donnelly (sp?) when in fact it was not.

It was a fascinating tale nonetheless, to me more so because of my personal bias of having a daughter following the almost exact steps of Donnelly, save for being part of the flight deck crew. My knowledge of the Navy has been increased, and the inner workings of a carrier not so mysterious to me.

Since the title of the book spoils the fact that there is a fire, you are waiting for it to happen. And when it did, wow. Great description and narrative.

The narrator, Patrick Freeman, did an admirable job with the myriad characters in the book, giving each a unique voice or accent, without sounding too cartoony. Kudos!

This audio book was gifted to me by the author in exchange for a unbiased review.

Growing Up and Becomming a Sailor

What did you love best about Fire on the Flight Deck?

The accuracy of the story line in going from being a civilian to becoming a USN Sailor.

What was one of the most memorable moments of Fire on the Flight Deck?

The description of all the interrelated actions while responding to the fire emergency.

Have you listened to any of Patrick Freeman’s other performances before? How does this one compare?

If you could rename Fire on the Flight Deck, what would you call it?

Fire on the Flight Deck!!!

“I was provided this free review copy audiobook by the author.” This review is for the audiobook version of Fire on the Flight Deck by Darren Sapp and narrated by Patrick Freeman. This is the second audiobook by Darren Sapp that I listened to. The first was Special Force: A World War II Commando Novel. While I enjoyed that novel, Fire on the Flight Deck was considerably better. It provided great detail and insight into how civilians are transformed into sailors. It brought back many memories for me having enlisted in the Navy at age 18. It was very accurate and I could instantly relate to the story line. The narrator did a fantastic job at reading the novel. Good inflection, good pace, and helped make the story come alive for me. This is one of those books that you can’t put down and are very disappointed when you come to the end because you just want to keep hearing more about the characters and more about the story line. I highly recommend this author, narrator and the book. I thank Darren for the opportunity to listen to his book by providing a free copy. After hearing the book I would have gladly purchased it. I will be looking out for future works by Daren Sapp and Patrick Freeman.

Would you consider the audio edition of Fire on the Flight Deck to be better than the print version?

I didn't read the print version, and as such can't comment.

What was one of the most memorable moments of Fire on the Flight Deck?

Basic training description was, for me, the most compelling, although the visual descriptions of carrier deck operations were excellent.

Have you listened to any of Patrick Freeman’s other performances before? How does this one compare?

I can't recall having listened to any, but I will going forward. Excellent performance.

I laughed out loud several times, and actually was upset when drama overtook some of the key characters.

I was provided this audiobook by the author in exchange for this independent review.

I was more than pleasantly surprised by this offering. Well researched detail, insider information, solid writing and excellent performance. The strongest piece of this story is , however, the characters. Each of them grow over time, and the listener is definitely "engaged" in their lives.

The story is well blocked out, and forms a concise package. I am very impressed by the combination of this author and performer, and hope to hear more from them over time.

Highly recommended to all.

USN sailor was does it take, this plot seemed very real, and then being on a carrier, when disaster happens. An excellent plot, and the narration gave the tension to the story by Freeman. Well done and enjoyable. Given audio for my voluntary review and my honest opinion

This book brought back memories from my time on th

This book brought back memories from my time on the flight deck on the USS Kitty Hawk. Thank you Darren Sapp for writing such a great novel. Brown shirt VF-51

as a survivor of
the

Excellent overview of life on an aircraft carrier

I enjoyed the stories included in this book. Brings back memories of when I served on the USS Forestall 77-80.

This is an incredible book. Though fiction, it reads true. Histories can give riveting details, but in this book WE KNOW THESE PEOPLE. You will never forget this book. HIGHLY RECOMMENDED!!!

Surrounded by Water and Fighting A Fire

Full Disclosure: I was gifted this audiobook by the author for review.

My major complaint about the book is a simple one, in his authenticity and attention to detail the author uses far too much Navy jargon which causes the reader to constantly have to flip back to an appendix to find out what he is talking about. As a former sailor it was a non-starter for me, however, someone unfamiliar with the terminology might be turned off and end up missing a great story.

Would you listen to Fire on the Flight Deck again? Why?

I enjoyed hearing about the character's real life experiences aboard the carrier. Brave Men !

What other book might you compare Fire on the Flight Deck to and why?