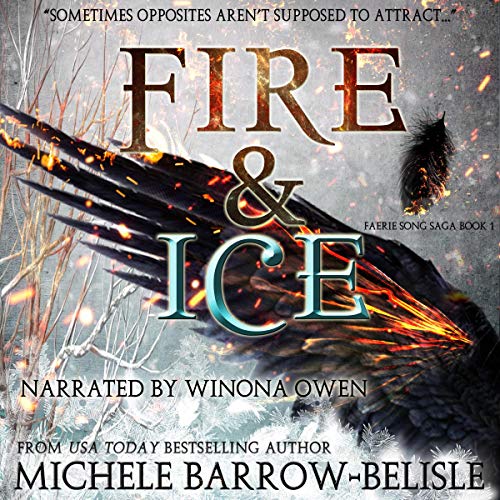 Adventure wasn’t something Lorelei Alundra was interested in. Gifted with two other-worldly talents for singing and healing, she’s always shied away from her gifts and the spotlight, preferring quiet anonymity, over attention and fame. But when she meets the enigmatic Adrius, with his dark and dangerous mystique and eyes that could see into her soul, her uneventful life becomes irrevocably altered.

Adrius turns up in every one of her classes and knows more about her than any newcomer should. Including the condition of her mother who is suffering from a mysterious illness. Accepting his offer to help leads her into a terrifying and thrilling world, where Elves are even hotter than Legolas, and Faeries...are nothing like Tinkerbell. The two magical beings are fire and ice opposites. One Lorelei can’t help falling for, and the other she's compelled to be with.

Now she’s trapped, expected to prevent a war between witches and faeries, or forfeit her mother’s life. Nothing is what it seems. Not her family. Not the Fey. Not even Adrius, whose feelings for her balance precariously between desire and danger. Despite her better judgment, she can’t say away from him.

As secrets unravel and unsettling truths are revealed, Lorelei must fight to save much more than her mother’s life. One mistake could put the fate of his world, and her soul in jeopardy.

Captivating from the very beginning. War? hot elves? Sizzling chemistry between the characters? what more could you ask for in a book. Amazingly well written and narrated.

An adventure into a world where witches & faeries are at war, Elves are hot and sexy, secrets are unraveled and the answers are not in Lorelei’s favor, but this is only book one in the Faerie Song Trilogy.
🎧 Reviewed for Audiobook Obsession 🎧

This is a whole new world. I do love these magical kingdoms. Good characters, great chemistry between them. Lots of action to keep you entertained. Fantastic performance from Winona.
#audiobookobsessionreviewer

Sometimes books about elves, fae, & fantasy lands get a little silly. This is not one of those books.

The detailed descriptions of the world, interconnecting species/characters, and the story itself was impressive & really painted a visual. The narration was outstanding and I always knew which character was 'speaking' before being name.

Minor criticisms are that the climax could have been a little more intense/dramatic, it could have been a bit shorter overall (it seemed to slow in the last 2-3 hours), and the repetition of the female lead's description of the male lead (I heard him described as beautiful/perfect/amazing & the color of his eyes so much, my own eyes were rolling in the last hour or so).

I love how the roles develop in this story. She is so clueless along the way with new surprises at every turn. She comes into her powers and defeats the ice queen. It is amazing and I hope in the next book she get to find her love and keep it. #AudioBookObsession

Some interesting elements with magic and the Fae

Listened to the story on Audible. Narrator does a good job; she does say some words weird, but her voice fits Lorelei's character well.

Lots of interesting, cool ideas. Loved all the magic stuff; healing powers, magic teas, and Fae magic. I just did not connect with Lorelei; she's just too much of a damsel, too clueless. Lorelei finds out she has a connection to the Fae world; there's a prophecy that she will defeat the ice witch. Adrius, a elf, brings Lorelei this information and brings her to the Fae world. Mostly against her will, so she's quite bratty about the whole thing; which is understandable, but it just makes her act stupid. She's too gullible and lacks common sense. She doesn't ask any important questions, she doesn't train before taking off to go after the witch; without weapons mind you. It would be on thing to not train in combat if you had intelligence to back it up, but she doesn't. She's just floundering around and happens to get lucky and not die. It was too much; I like at least a pinch of warrior in the lead female characters I read about. I should've known I wouldn't connect with her when she stays friends with a guy that dates the mean, spoiled jerk girl at Lorelei's school that treats Lorelei like crud. The story also moves too slowly at times; things are happening, but the main story is slow to progress. There's also a bit of romance between Lorelei and Adrius, but I didn't feel the connection there. They do have some sweet moments, but overall, the romance lacks chemistry. I also didn't like the author's take on the Fae in this story; they are all pretty much useless, selfish creatures, which is normal in some books, but it's not my favorite. Also, why in the heck didn't they support Lorelei more; she's supposed to save the Fae from the big bad and they just sit around and party. Makes the Fae look totally stupid. There's also a bit of a love triangle, but that too lacks any real chemistry. The story does have some cool aspects though; I was entertained during the bits of action going on. I've read the premises and some reviews for the next books, and while some of it intrigues me, I'm not in a rush to read them. I'm not a fan of the redemption for a villain type scenario; especially the snobby, evil type that is Venus. So, if I see the next books at a good price, I may check them out because I hate leaving a story unfinished and there were some good aspects to this story.

The world building was very mystical . Of course my favorite part of any fantasy are the different magical abilities and I loved this one . The narration was a delight and once I listen to a few of my favorite parts again , I will definitely get the next installment .

Wanted to love it but was underwhelmed

Decent writing and story flow but the lack of character development really stunted my enjoyment of this book. I enjoyed listening to the narrator and the plot had a fun amount of adventure butI don’t think I’d be interested in hearing any more from this series.

Author created a world you never want to leave! Downloading Book 2 as we speak so I can return.