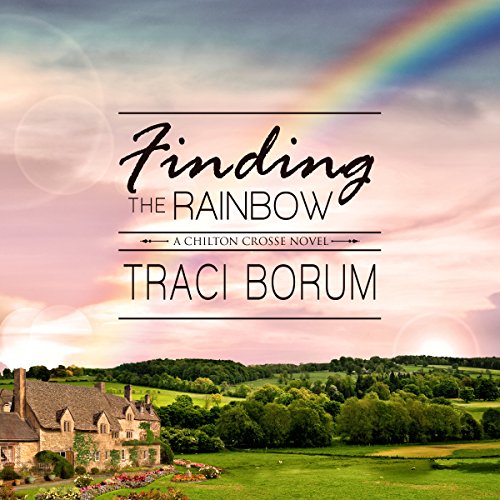 Holly Newbury's life is on hold in the cozy English village of Chilton Crosse. While her friends are marrying, having children, and embarking on successful careers, Holly is raising her three younger sisters and working part time at the village art gallery. Her life feels incomplete, but family is more important to her than anything. Then a film crew's arrival galvanizes the community, and Holly becomes fast friends with Fletcher Hays, the movie's love-shy American writer.

The production of an Emma film isn't the only drama in town, though. Their father makes a choice that threatens everything she gave up her dreams for. Holly's sisters endure growing pains. And Fletcher plans to return to America as soon as filming is over, ruining any chance of their relationship blossoming further. After years of sacrificing for others, Holly must find the courage to take a risk on a future she never dared to expect.

Would you listen to Finding the Rainbow again? Why?

Yes I would listen to it again. I liked the way the author included quotes from "Emma" and Jane Austen. The story was a good spin of Emma but with a modern twist. I loved the way the girls came together to help their father heal after living for six years in pain after their mother died.

What was one of the most memorable moments of Finding the Rainbow?

When Holly was explaining Emma's role and suddenly realized that her life was actually imitating Emma's life and she was able to find Fletcher.

Not an extreme reaction but I did laugh in some places. such as the description of Rascal's antics.

the story took a long time to get to the point but it was not boring. the author was able to weave the lives of all of the citizens of the town as well as the movie set people into the story and still stayed true to Holly and Fletcher's story. I liked how she brought the father's love story into the picture.
This audiobook was provided by the author, narrator, or publisher at no cost in exchange for an unbiased review courtesy of Audiobook Blast."

This audiobook was enjoyable to listen. The story was captivating. A friendship that develops slowly and blossoms into something more.

Holly had to give up her life 6 years before to come home and help her father raise her sisters. She puts her dreams on pause.

Fletcher is a sweet Texan writer than ends up in a small village called Chilton Crosse. He comes in with a crew to film "Emma" from Jane Austen.

Holly starts a book meet weekly and after meeting Fletcher invites him to their gatherings. She decides they should read Emma and he would make a great guest speaker.

Holly goes through a lot taking care of her sisters. Then out of a sudden her Dad drops a major revelation that could change everything.

Fletcher and Holly's friendship develops slowly and when he finishes the movie he has plans to go back to Texas.

The narrator did a great Job bringing the story to life.

The conclusion is nice. It wraps up the story well.

This audiobook was provided free of charge in exchange for my honest unbiased opinion.

One women who gives up so much for her family but I do not think they really give her the credit she should have. I did have a hard time getting into this it might be because I had not read the book before. It was a very interesting plot with normal family drama. What really made it for me was the narrator she really adds a lot to this audio.

Ms. Peterson voice fit so well to this story she really brings out the characters with real emotions and feelings. She has such a smooth rich voice you forget you are listening and really get into the plot. Her female’s voices are just as great as her male voice. I could listen to her voice all day and not get tired of it. I just love her accent it really pulls you as it complements the plot setting. There are no repeat of works, no change in volume. If any breaks were taken I could not tell. The audio is clean, crisp and clear giving you a totally enjoyable listen. You have no trouble knowing who is talking and what they are feeling. Ms. Peterson has a powerful voice that deliverers and wonderful audio. This is the second book of hers I have listen to and can’t wait to listen to more.

Holly has put her dreams on hold with the death of her mother giving all her time to her family. This is a normal family with normal issues and drama. I thought the girls were on the spoiled side never really thinking about Holly and all she does for them. I do like the slow buildup from friends to more with Holly and Fletcher. There are issues they will have to overcome if they plan to build a life together. I really liked Holly and how she put family first. There does come a time when you have to say enough and make your own way in life. Holly has some very tough choices.

The town was a very lovely town that makes the reader what to go for a visit. The author really put a lot of time and thought into building it and the characters in it. I thought it was an enjoyable read even though I had a hard time really getting into it.

Really good - felt like I was getting a two-fer (a book within a book). Narrator good, able to master both 'Texan' and Brit accents!

Well Written and Very Well Read - A Must Listen

Would you consider the audio edition of Finding the Rainbow to be better than the print version?

I wouldn't now as I didn't read it. But listening to it was so enjoyable I don' think I would have liked it as much.

Gertrude! Who else. Saucy with secrets of her and never afraid to say what she thought.

What does Nancy Peterson bring to the story that you wouldn’t experience if you just read the book?

Nancy has a soft and light English tone to her voice that made me actually picture being in a very small England town.

When Abby relived her mother's passing in the garden where so much of the lives of these characters took place. Very moving.

What made the experience of listening to Finding the Rainbow the most enjoyable?

I like Fletcher. I think he would be wonderful to know and have as a friend

I did have an extreme reaction to the father, I was very irritated in his hands off approach with raising his girls.

This was a very nice story. I didn’t read the first book in this series yet, but I definitely will. I loved how Holly and Fletcher became such good friends so quickly. I think the family dynamic with Holly filling in as a mother figure and the struggles she faced as a big sister felt very real. The village felt very real to me as well. It was so nice to meet these characters and learn their different personalities. I especially enjoyed Gertrude.
The narration by Nancy Peterson was completely spot on. She read each character perfectly. I am always happy to find such great narrators. I think she truly made the story come alive. I want to hear more books narrated by her.
This audiobook was provided by the author, narrator, or publisher at no cost in exchange for an unbiased review courtesy of Audiobook Blast.

The story is a full on friends to lovers tale that includes Actors, puppies, children, Spinsters, some trauma, a book club, a terrific friendship and a few tear jerking moments.

I so enjoyed this book. I really felt completely drawn into this community and this story and thought the book club correlation was interesting.

Absolutely loved Fletcher and Holly and her whole family. The family dynamic
added really nice secondary story lines to the book.
So, so good!

I received a copy of this audiobook free of charge from audiobookblast in exchange for an unbiased review.

What a great listen!!

This was the perfect blend of a great story with great narration. I finished the listen in one afternoon!!!

I loved the family and the author did a fantastic job detailing the very intricate fabric of day-to-day life for them. It was simple but never, ever dull.

The idea that the famous Jane Austen novel "Emma" plays center stage was icing on the cake. Just a good listen all around!!

Being a Jane Austen fan, I think Finding the Rainbow was a good fit for me. I loved the quotes and the fact that they were filming Emma in her village. I also loved the characters and the way Traci Borum wove the twisting plot. Nancy Peterson did a beautiful job narrating, but it was a little hard getting used to the accent. I would especially recommend this book to any Jane Austen fan.

I was given this audio book in exchange for an honest and unbiased review.