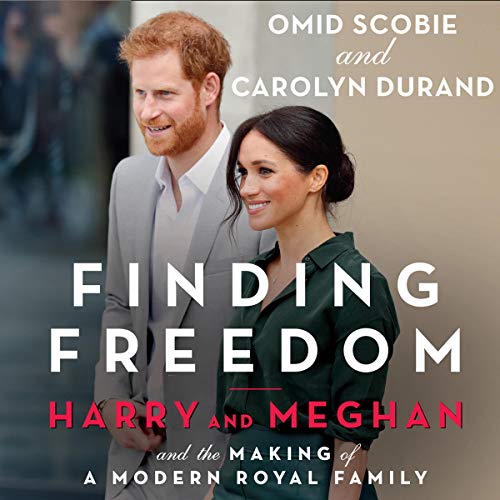 Finding Freedom: Harry and Meghan and the Making of a Modern Royal Family

Whilst much has been written about Harry and Meghan, the Duke and Duchess of Sussex, Finding Freedom goes beyond the headlines to tell the true story of their life together with intimate detail, dispelling rumours and examining their tradition-defying decisions.

From the start, the love story between the adored Prince Harry and American actress Meghan Markle attracted international attention and sparked controversy. Countless narratives exist around the couple, as is characteristic of any British Royal Family member and love interest thrust into the spotlight. Harry and Meghan’s whirlwind romance was met with a public onslaught of rumours and media scrutiny; however, their very private, early days away from the public eye aren’t so elaborately documented. And the couples’ determination to step out of the spotlight and forge a new path is not widely understood.

London-based editor Omid Scobie and American journalist Carolyn Durand have written about Harry and Meghan since their early courtship. In Finding Freedom, Scobie and Durand draw on privileged insights from their extensive conversations with friends, relatives and colleagues who are close to the couple and far from the public eye. Filled with details unbeknownst to tabloids, this audiobook, narrated by Scobie, provides a candid, up-close and frequently surprising portrait of the Duke and Duchess of Sussex and their dream of making a difference in the world through their work as humanitarians and activists.

Finding Freedom was implicated in Markle's complicated lawsuit against Associated Press in 2020 because the High Court deemed it admissible evidence due to her ‘collaboration’. This implication speaks to the authenticity which the title offers. Perched at the crossroad of old tradition and modern fascination, Meghan and Harry’s story in Finding Freedom is an unexpected revelation.

When news of the budding romance between a beloved English prince and an American actress broke, it captured the world’s attention and sparked an international media frenzy.

But while the duke and duchess of Sussex have continued to make headlines - from their engagement, wedding and birth of their son, Archie, to their unprecedented decision to step back from their royal lives - few know the true story of Harry and Meghan.

For the very first time, Finding Freedom goes beyond the headlines to reveal unknown details of Harry and Meghan’s life together, dispelling the many rumours and misconceptions that plague the couple on both sides of the pond. As members of the select group of reporters that cover the British Royal Family and their engagements, Omid Scobie and Carolyn Durand have witnessed the young couple’s lives as few outsiders can.

With unique access and written with the participation of those closest to the couple, Finding Freedom is an honest, up-close and disarming portrait of a confident, influential and forward-thinking couple unafraid to break with tradition, determined to create a new path away from the spotlight and dedicated to building a humanitarian legacy that will make a profound difference in the world.

What listeners say about Finding Freedom: Harry and Meghan and the Making of a Modern Royal Family

The books is a mere adoration of Megan and Harry. Seemingly the fact checking the authors claim to have done has let them down since the book is full of inaccuracies.