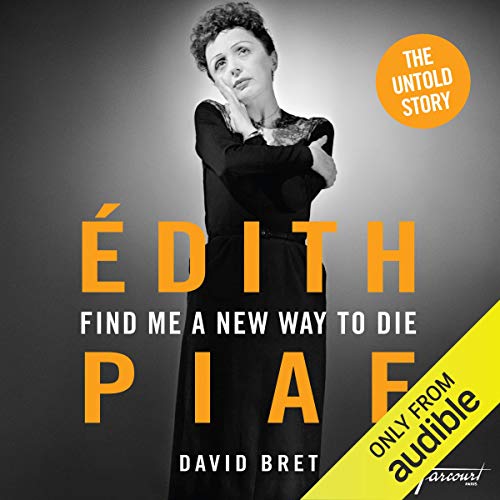 Find Me a New Way to Die

Find Me a New Way to Die

Edith Piaf was one of 20th-century France's brightest stars, an international sensation, and since her death in 1963 has become a legendary figure.

Her life story is so compelling that it has become difficult to separate the truth from the hearsay, thanks to a wealth of stories, plays, films and biographies about her life, designed to lionize: that she was born on the pavement of Rue de Belleville 72 on a pile of coats; raised in a brothel; a hero of the French resistance; losing the love of her life in a plane crash; and her untimely death from liver cancer.

Shrouded by these fantastical stories, the 'real' Edith Piaf is often indistinguishable from the legend. Having written two biographies of Edith Piaf over the past 25 years, David Bret has become intimate with many of those who knew the legendary singer. Much of the information he collated previously did not appear in his earlier Piaf volumes, as some interviewees did not wish what they said to be published until after their death.

November 2015 will see Edith Piaf's centenary, and ahead of this David has written a new biography which centres around these very important interviews with Piaf's friends, lovers, colleagues and songwriters. For the first time, David Bret is in a position to reveal the material that was too controversial to publish whilst the interviewees were alive.

This new audiobook will mean a significant revision to the Piaf myth.

French-born David Bret is a leading authority on the French music hall and has written books on the subject, besides best-selling biographies of many of the world's greatest show business icons.

A good brief summary of an interesting life.

Where does Find Me a New Way to Die rank among all the audiobooks you’ve listened to so far?

I had very little knowledge of Edith, this book gave me a very good understanding.
Well written and narrated.

Great narration, he showed that he wanted to read about Edith.

this is a good history full of characters

Which character – as performed by Daniel Pirrie – was your favourite?

I'd recommend this book, the narration is absolutely superb, my favourite of any audible book so far. The depth in which the book goes into about Piaf and her life is amazing.

I enjoyed many scenes in the book, particularly about the entwining lives of other famous people from that era like Marlene Dietrich, Marcel Cerdan etc.

I could of easily listened to it in one sitting if it wasn't for noisy children distracting me. It's a book I wanted to give my full attention to.

The narration by Daniel Perrie is wonderful. What a voice for a narrater. So many books are ruined by poor narration but not this.

The book mention pictures and no pdf is incluyed

Would you try another book from David Bret and/or Daniel Pirrie?