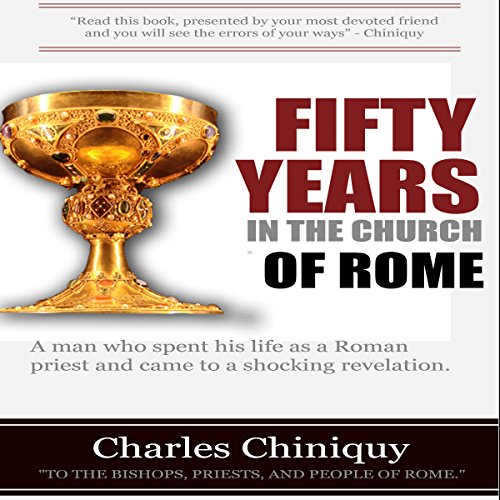 Fifty Years in the Church of Rome

This is an excellent look at the religious system of the Catholic Church from the inside.

Charles Chiniquy was born at Kamouraska, Quebec, Canada, to Roman Catholic parents. He studied at the college of Nicolet in Canada; after graduation he entered the priesthood (at an early age) and continued therein until he was an old man. At the age of 49 he left the Roman church, taking his congregation with him, and became a Presbyterian minister. His encounters with the inner workings of the Roman church are enlightening and could come only from someone who was embedded in such a system for so many years. He later published a number of books and tracts on temperance and about his life and experiences in the Catholic Church, some of which became very popular and were translated into several languages.

In this book he covers such subjects as:

What listeners say about Fifty Years in the Church of Rome

A must read for all Christians & Roman Catholics.

One of the best books ever written. An expose of the power that rules the world through religion.

What an awesome expose... From the inside!

What an awesome expose... Right from the whorses mouth! I have been a lifelong student of protestant doctrine from the Bible alone, but no one can tell this story like Chinniquay! Rediscover the protestant reformation with this most excellent work!!!

This book, which is essentially an autobiography, is quite amazing. Due to the fact that it was written in the 1800s, the author is ostentatious in the way he presents the events of his life. But the two final chapters, which concludes his personal experiences, make the entire audiobook worth any unpleasantness.

Dan Kassis who reads the text, was a perfect match for this audiobook. He gave a 10/10 performance! In fact, his presentation was so convincing that I imagined Mr. Chiniquy would have sounded exactly the same, if he had read the text.

This book is read by an excellent reader with multiple accents that add to the story. It is both a very interesting and informative book. I learned a lot on a wide range of both religious and historical topics. Such an excellent book! Long, but well worth it!

The only negative is that I wish Audible would fix the discrepancy between the chapters in the book and the Audible listed chapters since Audible counts the intro as chapter 1.

A Book that needs to be Read by Every American.

Wow where to begin with this book.
My mother read a lot of it in college and has often sighted it as a major influence on her life. On a whim we searched for it and found this GLORIOUS audio version.
The first chapter hooked me, broke me and Drew me in very fast. There are moments that may seem a bit dry and bland to people who are not students of theology, but power through them if you must because the stories (including a major encounter with Abraham Lincoln, as well as being a friend and advisor to him on later years, and having certain (well laid out and all but proven) theories about his death, are WELL worth it.
This indeed a LIFE CHANGING BOOK. Once you've read it, you will never be the same, but be WARNED you will also be responsible for what you now know. If you read this to the end there will be many things of which you can no longer say "I never knew."
The Reader (Dan) is MARVELOUS. Doing multiple voices and accents and reading in (to my untrained ear) excellent French. Breathing life back into both Charles himself and those he meets along the way.

This book far exceeded my expectations, and was full of surprises in every chapter. The story telling rivals Dickens and Dumas, and the fact that it is autobiographical makes it even more thrilling. Every Christian should read this book and I believe even non Christians will find its contents a compelling account of an amazing life, filled with countless adventures, triumphs, and betrayals. The narration by Dan Kassis is flawless with perfect accents and emotional portrayal. I have read many books in my sixty years of life but I must confess this is one of the best reads I have ever experienced. I feel that it has breathed new life into my soul. Relish it and be transformed.

This amazing book presents a dark page in the terrible history of the Roman Catholic church. Although it is remarkably full of information, it does not fail at gripping the reader/listener as many history volumes might. This book is a must read that will shock and change so much i the life of its reader/listener. Take my advice... be ready to clip and add notes frequently!

an absolute must read for every Christian

this book should be read by every American citizen and specially by every Christian. please read it and be warned of who your enemy is.