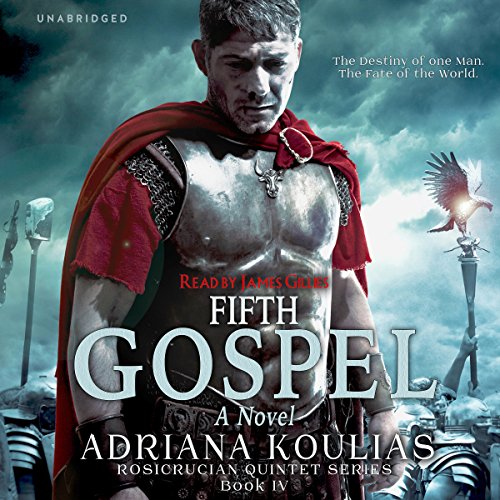 By: Adriana Koulias
Narrated by: James Gillies
Try for £0.00

The destiny of one man. The fate of the world.

From the acclaimed author of Temple of the Grail, The Seal and The Sixth Key comes a singular achievement, a novel that transcends the four known gospels to unveil a secret kept hidden for centuries: the secret of the two Jesus Children.

It is 1244 and the Castle of Montsegur is under siege. Trapped in the small fortress perched high in the Pyrenees, Cathars and their supporters fight to avoid death on the pyre at the hands of the Catholic Church. Amidst the carnage and mayhem of war, a woman mysteriously appears to Cathar Perfect, Bertrand Marty; a woman with a tale to tell. Two worlds collide, Judea and France, as she unfolds a story of shattering proportions, revealing secrets, both dangerous and devastating, which have been hidden for centuries in the annals of a Fifth gospel.

A story of courage and sacrifice, of faith beyond life, and of astounding secrets buried in time.

What listeners say about Fifth Gospel - A Novel (Rosicrucian Quintet)

What made the experience of listening to Fifth Gospel - A Novel (Rosicrucian Quintet) the most enjoyable?

The Story is of course captivating. This is not just the normal biblical events associated with Jesus and the Christian origins. This is the story behind the story - as captured so wonderfully by the Author in her Novel.

The voice timbre and the pacing is superb. Just sit down and listen to the most wonderful story on earth.

This novel is set to be a classic and this narration really does it justice.

I have to admit I have never listened to anything like it and I don't expect I will do so again. It will live with me forever. It is a book to kindle a fire in the heart, but it also makes you think.

The narration is so sensitive and seamless you forget you are listening and you begin to live it! Inspiring, uplifting - an awakening!