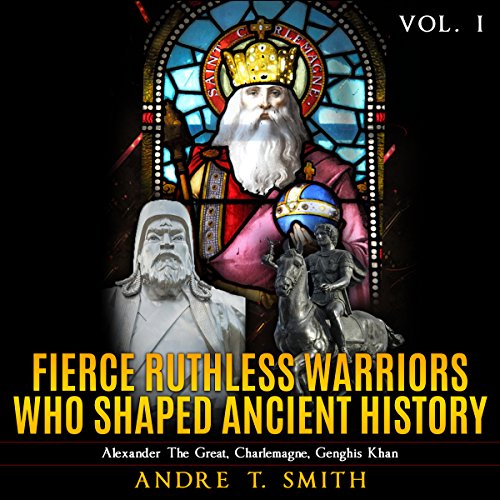 In this first volume of ancient leaders, the lives, battles, and accomplishments of three of the most renowned warrior kings are examined.

Alexander the Great hastened historical change in the Mediterranean and Near Eastern worlds, and his vision for a Panhellenic world stretched over two millennia after his death, crossing foreign cultures and religions, traditions, and even nations far from his reach.

He modeled himself after the hero Achilles of Trojan War fame, and was inspired by the legends of Hercules. He was fearless and sought to become one of the gods, ordained to unite the nations under his banner.

Charlemagne was the bridge between ancient and modern Europe and the spreader of Christianity among pagans to the north and south of Francia. He was an ingenious military strategist, a wise and ruthless leader, a cunning politician, and a devout believer who ensured the survival of Christianity in the West. He also believed himself above the rules of the church, and coldly ordered the execution of 4,500 prisoners.

In an unprecedented act, he joined his military might and his monarchy to the power of the Church in Rome, giving him more power than any other king before him.

Mongol leader Genghis Khan is believed by many to be greatest conqueror the world has ever known. His empire stretched from the Pacific Ocean to central Europe, including all of China, the Middle East, and Russia.

Concise, insightful, and eminently listenable, Fierce Ruthless Warriors Who Shaped Ancient History: Vol I provides a wealth of information about three remarkable men and the impact they had on the world. Their stories are filled with violence and heroism, politics and diplomacy, social change and religious tolerance. And each made a mark on history as both a ruthless murderer and a visionary leader.

A real shame, for such a great subject the narrator is truly awful. Sorry, I did try to like it!