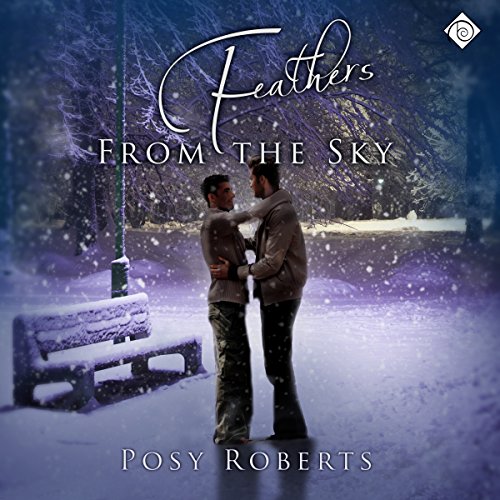 Feathers from the Sky

Cal Thompson is going a little mad over the Christmas holiday, stuck in a tiny house with fourteen members of his immediate family. There's no privacy and no boyfriend to help him cope - because Philip is still a secret, though not for long. Cal's family knows he's bisexual, but they've always assumed Cal would marry a woman and be fruitful and multiply. Just as he's ready to set the record straight, his parents tell the family they're selling the family house and tip this introvert's world on edge.

Philip Sherman arrives at Cal's family home to find his lover mourning the loss of his home, paralyzed by the abrupt and unexpected announcement that trumped his own. Though Philip takes the setback in stride, they won't be able to avoid the calling of their hearts for long: Cal needs to reveal the truth of his relationship with Philip to his family, and Philip has a question he's desperate to have answered.

What listeners say about Feathers from the Sky

If you could sum up Feathers from the Sky in three words, what would they be?

Cal for sure, the way he fights with his emotions and feelings but doesn't come across as stupid or conceited.

The bedroom, when Cal first learns that his brother isn't fooled by his ruse.

Feathers in the Sky.

Cal has been dating his best friend Philip for three years, and they’ve been living together as a couple for more than half that time. Headed to his family home for Christmas, he has decided to tell his parents the truth about his sexuality, only to be taken aback when his parents tell him they are selling the house and relocating for his dad’s job.

His family is large and loud and their home is small and meager, but it is just that, their home. A lifetime of memories are wrapped up in those four walls, and Cal is having a hard time accepting the news. Philip is very gracious and understanding of Cal’s feelings and doesn’t put any pressure on his boyfriend to tell his family the truth about their relationship. Turns out part of Cal’s family already figured out what he and Philip mean to each other, and the other part could really care less.

For such a short story there was a lot of content. There is a little something about each member of Cal’s large family, but the core of the story is Cal and how his emotions are playing out with the undue stress he has put on himself about coming out to his family, which is only compounded by the news of the house being sold. He and Philip were so sweet and passionate with each other, and that ending was picture perfect, especially the reference to Feathers in the sky.

This is the first audio for me where Morey does a foreign accent, and he totally nailed it. I especially loved how he put Cal’s thoughts to words and gave them feeling and depth. Perfect little snack for the Holiday season, definitely a must listen!

it was a cute short story and you get what you paid for so I'm ok with it. im content with the story and the characters. A couple moments seemed to drag, others made it feel more like this was like 2 or 3 chapters cut out of a larger story. I think it was good at making these characters life like. I was ok with the narration but for a character who was supposed to have a light English accent, he had a very noticeably awful Irish accent instead. but I'm content with the story and the ending and there characters in general. this wasn't anything super memorable but it also wasn't bad or anything, It was unique and enjoyable enough to pass the time. I don't regret getting it but I'm not sure I'll relisten to this again.

This was such a sweet quick holiday read. I would have liked a little bit more seeing Cal and Philip as a couple & maybe a short epilogue with maybe them getting ready for hosting one of the future Christmas get-together at their new house. When Cal was a lot younger, he came out as bisexual to his family, but he feels that they didn't really believe him as they only knew about the women he dated and not any of the men. They also think that Philip is just a roommate instead as his live-in lover. Now it's time to come clean with his family & he is afraid to do so. I loved that his huge family loves him & accepted him as he is. I loved all the crazy things they did as a family.

Cal is going home for Christmas. He’s part of a huge family and though his parents are very liberal, he worries about coming out to them, but this is the year he plans to finally come clean. He’s invited his “roommate” (his boyfriend) to share the holiday as well.

Philip is the perfect boyfriend. Supportive. Loving. Understanding. Loyal. He wants to be part of Cal’s family, yet he doesn’t pressure him into telling them, but he’s hopeful.

Most of this short Christmas story is about Cal facing his family and their surprise announcement that his parents are selling his childhood home. He has to face what “home” really means and determine just who he is and what “family” means to him. He has to finally grow up.

Philip is nothing but supportive, and when he shows up he’s embraced with open arms. He’s shown the crazy life Cal had, being one of seven children, and falls in love with the madness.

When push comes to shove, it turns out Cal needn’t have worried, the family accepted his announcement with grace and Philip rewards Cal’s courage with an important question of his own.

**
Though this had romantic elements, it wasn’t your typical romance. Cal and Philip are a solid couple and there really isn’t any issue there. Mostly, Cal just needs to face the final hurdle and claim his adult-self, free from his family, free from his childhood home, and embrace who he is, as a man and as an artist.

I really enjoyed this story. It was almost a “coming of age” in that, at 26, Cal still needed to cut the apron strings of parental expectations. Though he had lived on his own for years, he still pictured himself as the boy who lived in the house where he grew up.

When he learned that childhood home was going to be sold, he had to face the fact that he was no longer that child. He needed to make the leap and “confess” his sexuality and face the fact that the art he wanted to do wasn’t the typical portraiture his family thought, but instead more body forms and creative, less “reliable”. He wants to travel the world with Philip and take photos. This does not lend itself well to becoming a father.

His biggest hang-up was that he worried his mother would bemoan the loss of grandkids, because though adoption, surrogacy, etc. is an option, he and Philip really didn’t want kids. This is ridiculous, given that he has 6 other siblings, some of who already have kids, to provide the needed grandchildren.

In the end, it was touching and sweet. Sort of a melancholy look at growing up and letting go, but hopeful and exciting, too.

Paul Morey, a favorite in this genre, did another really nice job with the narration. My only problem was Philip. He was supposed to be British, but the accent was definitely more Scottish or vaguely Irish. It’s a small thing, but it sort of bugged me.
The rest of the voices were nice, nothing too dramatic or exciting, but easy to understand and it was easy to lose yourself in the story.

Overall, I’ll round it back up to 4 of 5 stars because it really was a nice listening experience and I enjoyed the story.

I loved this story! Just so cute! Paul did a good job as usual. I would recommend this for a light good time listen. Short and sweet! I will listen to this again when I need a little pick me up!!! Great job!