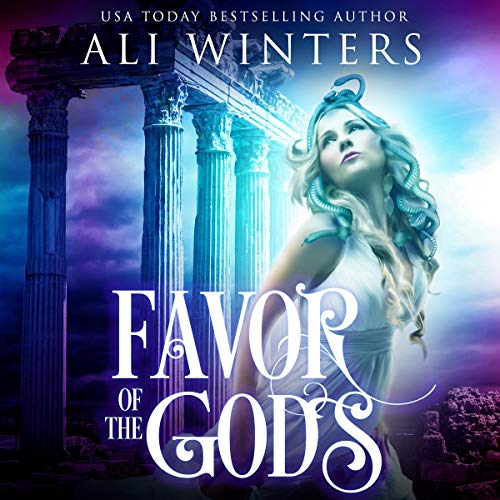 Favor of the Gods

By: Ali Winters
Narrated by: Sarah Puckett
Try for £0.00

"Like Icarus, you flew too close to the sun. Someone had to bring you back down to reality. You don’t belong with princesses, heroes, or demigods."

Ever since Medusa unwittingly crossed her school’s resident mean girl, her life has been hell.

If only she could keep her distance from Perseus who has a knack for always being in the wrong place at the right time.

But rivalry goes too far when a curse that can destroy the village is cast.

Only the favor of the gods can reverse it, but the gods are vengeful and not always forgiving.

What listeners say about Favor of the Gods

I love Greek Mythology and this is an amazing story; wonderfully narrated, of a new spin on Medusa and those who revere the Gods

good audio book to listen to

this was amazing to listen to. i couldn't put it down .i loved it and i believe she picked the right voice for the book. five star audio book, i highly recommended it

This was a really cool twist on a Greek myth. I found it to be engaging and interesting, albeit with a tiny dash of insta-love. This was well written and really enjoyable.

The story of Madusa is well known, but this a twist to her love story. This story was how every story has two sides. Madusa was always the bad person in all the stories, but maybe she wasn't the bad one after all. A great short story read by the great narrator Sarah Puckett.

I wasn't quite sure where this was going to go, but suddenly it all made sense as it progressed. I really enjoyed it. The characters were brought beautifully to life by Sarah Puckett and I could feel them around me as I listened. I would love this story to carry on more as I am intrigued by the characters, but saying that it is short but perfectly formed.

This story tells us about the origins of the mythical creature known as Medusa.
It's a very interesting and original explanation, that of being an unjust curse by a god. I'm only sorry that such a short tale doesn't leave a lot of room to expand on the other characters, specially the jealous girl that causes the tragedy, or, more important, the aftermath - everybody loves a bit o payback, right? ;)
The narration is very good and engaging, even though I kept listening her name as "Medissa". I wonder if it's really pronounced like that in english... (I'm portuguese FYI)

Short story of Medusa and Perseus

Definetly a different kind of story. A story of a bullied and wrongfully cursed Medusa and the hero Perseus.
AudiobookObsession

Medusa is new at the school and unintentionally made the mean girls mad by speaking to the wrong guy. When bullying her does not work they lies to the gods who punish her by changing her. Good twist to this story.

I really enjoyed this book. Sarah did an amzing job voicing all the characters. I look forward to reading more of Ali Winters stories and Sarah is fast becoming one of my favourite narrators.

This is a very unique story. I really enjoyed it. The narrator was very great as well. This is a great book for something short and sweet. Something you can listen to all in one sitting. Like while doing chores or working out. It adds a nice twist to Greek mythology as we know it.

My only critique is that it just wasn't long enough. I felt like there were many issues that should have been enhanced upon. I'd of liked to see more scenes that were mentioned or referenced but not really put in. That being said, it was great the way it was. I fully recommend.

The Gods Can be Petty and Cruel...

Favor of the Gods is written by Ali Winters. The narration is provided by Sarah Puckett. The audiobook is published by Ali Winters. This is a short retelling and modernization of the Medusa story. The runtime is only 1 hour and 9 minutes but the short story is well worth listening too.

In the authors take on this Greek Tragedy, Medusa has crossed the resident clique of mean girls. She has drawn the ire of Andromeda because Perseus is always showing up in the wrong place at the worst time for Medusa. The author does an excellent job of adding the modern themes to this ancient Greek tale. Specifically, the themes of anti-bullying and non-discrimination due to differences in appearances.

The narration by Sarah Puckett was excellent. This is the first performance that I have heard from Ms. Puckett but I greatly enjoyed how she gave each character a unique voice and conveyed the emotions of the characters. The production value of this audiobook from Ali Winters was of this highest quality. The entire performance was crisp and clear. This was a flawless production. I was given this free review copy audiobook at my request and have voluntarily left this review.

Short and sweet! I enjoyed listening. The author did an excellent job at keeping me enthralled with the story. And it really spoke volumes with the message of the story. Anti bullying is a message we need in more young adult books and Ali Winters did such a good job of including it in the story. And the new take on the Medusa story was fun to read. I can’t wait for another audio from this author!! Oh yeah, the narrator was good also.

This is a great short story about Medusa. The narrator did a wonderful job bringing the characters to life. I even listened to it twice. This one little short story has gods, demigods, nymphs, a curse and angry villagers. What's not to love.

I enjoyed FAVOR OF THE GODS and recommend it.

The story is an interesting blend of the classic myth modernized style of Avalon High and the misunderstood villain origin story of Wicked, but with Greek mythology’s Medusa. It’s a brand new take on this classic take that I wasn’t expecting, but thoroughly enjoyed.

The narrator’s vocal quality and cadence was easily to listen to. I had no problems understanding what she was saying. While the variation between the different characters was not quite as drastic as I would have liked to help flesh them out, they were different enough that I could tell them apart and consistent throughout.

Overall, I enjoyed this audiobook and would recommend it.

Listened to it twice in one day!

A week in the life a young Medusa. Angst, jealousy, love and heartbreak in one short wonderful story.

Great twist on a favorite tale!

I listened to the Audible of this, and uuuuuugh I want more! I mean, the story was complete in itself, but I could have kept on reading this for much longer and not gotten tired of it! I loved the new view on Medusa's curse, thought the whole story was just wonderful.

The narrator did a wonderful job, as well!

5 Platypires to it all around!

Both sad and heartbreaking, this will keep you listening to see how this ends. Ali Winters is simply brilliant 💖💖💖

I liked this one. It was short, but well executed. There is just enough content to get you engaged and tell you a story. The author balances level of detail with story progression appropriate to the short length. The narration is very well done and really brought this short story to life.

A Twist on Medusa

This was a really great short listen. This was an interesting twist to the Greek mythological story of Medusa and how she became cursed. I enjoyed this fast listen and wished it was longer. I hope the author chooses to expand on this book because I would have really liked to hear more.

I absolutley love Sarah Puckett as a narrator. She does a really good job with this performance. The sound of her voice matches the age the characters seem to be.