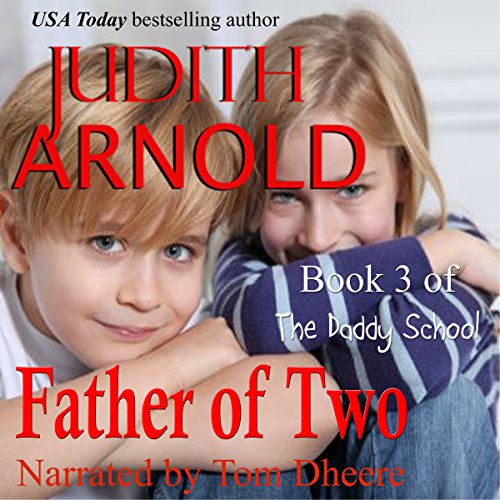 By: Judith Arnold
Narrated by: Tom Dheere
Try for £0.00

Book Three of the Daddy School series, originally published in 1998. Dennis Murphy's rambunctious seven-year-old twins swear he's the best lawyer in Arlington, Connecticut. They don't make his job easy, however. When the nanny he hires to watch the twins walks out on them one afternoon while Dennis is meeting with the opposing attorney concerning a libel case, Dennis is forced to bring his work home with him.

Gail Saunders is a lawyer in the public defender's office. When her former client, a Russian immigrant who's had a few scrapes with the law in the past, implores her to sue the city's newspaper for libel after his name appears in a front page article in connection with a series of thefts, she agrees to represent him, even if it means going up against Murphy and his prestigious, wealthy law firm, and even if it means she has to deal with his wild children once their nanny goes AWOL. Gail isn't the sort to become all warm and fuzzy around children-especially imps like Sean and Erin Murphy. She's missing the maternal gene, and the romantic gene as well. Just because Murphy is smart and funny and sexy as hell doesn't mean she's going to fall for him. She knows his seductive charms are merely tactics in his effort to win the libel suit.

Being the sister of one of the founders of the Daddy School, Gail believes Murphy could use a few lessons in how to be a better father. But she's got a few things to learn, too, and Dennis Murphy might just be the man to teach her.

What listeners say about Father of Two

What did you love best about Father of Two?


In this installment of the Daddy School series (the series really is better than the juvenile sounding title) attorney and father of two 7-year-old twins, Dennis Murphy finds himself trying to settle a case. The case is between his client, a newspaper publication, and attorney Gail Saunder's client, a Russian mobster who immigrant who has been defamed by the paper.

Gail is not interested in finding a boyfriend or husband after a an assault in her. She doesn't like kids and doesn't want to be around them.

Gail finds that she has to meet with Murphy in his home, regarding their lawsuit. She is not charmed it all by the seven-year-old twins and tells Murphy that he needs to learn about kids. She says he should attend her sister's Daddy's School to learn proper parenting techniques. He bites back with a bet that he would do better as a parent than she could ever be. He challenges her to go to the school as well where the instructor will decide who has the better parent technique. It sounds and is silly, but the book is more than the challenge.

I really enjoyed the series, it is well-written and believable, even if it is a bit hokey or cheesy at times.

Tom Dheere is an excellent storyteller. He has a 'man's man' voice. However he does an excellent job with characters from one or two years old all the way up to adults, boys, girls, men & women. He is perfect. The author is smart to stay with him through the entire series

While *I was given a copy of this series in exchange for my reviews I recommend the series very highly. I would use my credits and for money to purchase these books. It's a great, nice series and each book has just a little bit of naughtiness. Near perfection!

Thank you for reading my review. If you found that it helpful, would you please select yes below this paragraph.

This book was adorable. The twins had the right dose of precociosness. The Daddy School concept should become a universal actuality. Kudos to the author.

Have you listened to any of Tom Dheere’s other performances before? How does this one compare?

This is the 4th book by Mr. Dheere that I have listened to. The first was one of the first that he had ever recorded so it had its ups and downs performance wise. The last three are the first 3 books in The Daddy School Series. You can see the progress Mr. Dheere has made in the time since that first book I had listened to. As these books are equally weighted as far as male and female leads, I feel that Mr. Dheere is the perfect voice for these books. He gives each character the attention to detail that makes them come alive. He does a hilarious 2 year old!

Father of Two is the 3rd in The Daddy School series. Dennis Murphy has taken full time physical custody of his 7 year old twins, Sean and Erin. In the beginning it is a little rough and after the nanny walks out, Murphy must rush home to take care of them. In doing so opposing attorney Gail Saunders comes home with him in order to try and finalize a settlement for her client. The twins are 'loud and in the way'. Gail suggests that Murphy needs help and that he should attend her sister's Daddy School classes. Gail, who doesn't like children, also attends the classes as part of a bet with Murphy. Who will be the 'better parent'? Only time will tell.

I've really enjoyed Ms. Arnold's Daddy School series. I like the way that the male and female leads are equally strong. Yes this is a romance but the romance feels balanced. I look forward to listening to more in this series.

I would recommend this book to my friends and family.

Another hit for Judith Arnold!

What made the experience of listening to Father of Two the most enjoyable?

I love the authors sense of humor and the romance in it & it was a FUN book! The narrator made it even better with all the voices too!

What other book might you compare Father of Two to and why?

I don't like to compare books because if someone didn't like the book I recommended, then they wouldn't like this book & that wouldn't be fair. All books should be judges by themselves!

Have you listened to any of Tom Dheere’s other performances before? How does this one compare?

Yes! Tom does a fantastic job with voices & his accents sound so authentic! Tom did a great Russian voice with accent in this book!

A romantic comedy that is sure to entertain!

I loved this entire series! I have now read all 3 books of the Daddy School series & every one of them are great! They all include romance & humor & even some suspense! I enjoyed book 3 (this book) the most because I loved the twins! Those 2 kids are wise beyond their years and a barrel of laughs! Kudos to the author, Judith Arnold who writes such great books & to the narrator Tom Dheere too who delivered these books flawlessly! Good job!