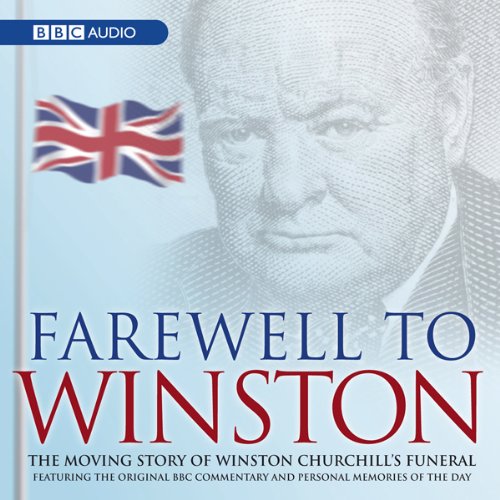 Nicholas Witchell presents the BBC Radio 4 programme that marked the final farewell to a great statesman.

Nicholas Witchell remembers the winter's day on 30th January 1965 when the sleet fell and a generation who had lived and served through the Second World War lost an iconic leader.

This programme focuses on the grandeur of Churchill's state funeral, and includes the procession through the City, following the coffin¿s final voyage down the river to the Royal Festival Hall where, 'all the cranes on the Hay¿s Wharf started dipping their long necks... in an eerie, unforgettable civilian salute.' Then there is the final scene at Waterloo Station as the coffin is taken by train to its final resting place at Bladon Parish Church, Oxfordshire.

Farewell to Winston recollects the thoughts and feelings of the wartime generation, with archive material from the day itself and contemporary interviews with those who were in the crowd or part of the procession. There are tributes and commentaries, including those of Winston S. Churchill, Nicholas Soames, Lord Deedes, Lady Soames, and Peter Dimmock. The programme also includes excerpts from the original BBC commentary by Richard Dimbleby and Raymond Baxter.

"A remarkable documentary capturing the day when the people of London paid their respects at Churchill's funeral." (The Independent)