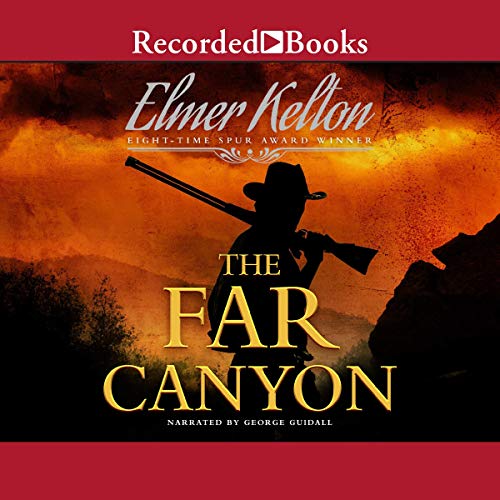 By: Elmer Kelton
Narrated by: George Guidall
Try for £0.00

Spur-Award winning author Elmer Kelton delivers the sequel to his novel Slaughter with this powerful story of one man's search for peace on the war-stricken plains of the Wild West.

In The Far Canyon, Kelton masterfully unveils for his listener the finality of the buffalo’s demise, the beginning of a time when cattle would replace the American bison on the Southern plains and ultimately end the Plains Indian culture. The novel reveals the history of the period, not in a general grand swoop of the pen, but rather, up close and personal, so his listeners can judge the impact of the period upon his characters.

What listeners say about Far Canyon

Maybe my favorite Elmer Kelton book . George Guidall is a top notch narrator and another favorite. His character voices just bring them alive. Well worth listening to.

Story line hold your interest throughout the book. George Guidall is the perfect narrator. As always his interpretation is spot on.

The second book continuing from Slaughter. Really enjoyed how we just continued right into this book from the end of Slaughter. Jeff Lanes backstory is a nice surprise worth how it ties up with Crowfeather. As always George Guidall narrating is a big plus. He really puts you in the book. Just wish there was a third book.

First of all, I must admit that I would love hearing George Guidall read anything...maybe, even the phone book. When he reads a book, the listener can just settle in and enjoy the yarn he is about to spin.

But, this is a good yarn about the settlers in the midwest, and the life and hardships they experience on the Prairie and cattle ranches. Good people; hard work; joys and sorrows. The characters were well-drawn and credible. I hope that there will be a sequel to follow up on the family members.

I enjoyed this book very much. I did not know it was a continuation of the book Slaughter. both of these books are full of good and bad like all good storyline. I found myself having a hard time putting it down.

This second book I have listened to that desperately needs a more complete ending or at least an epilogue. To much left hanging

Elmer Kelton and George Guidall make for the best audio book experience. The West is alive with these stories

A first read from Elmer Kelton.

Awesome, clean love story! you can tell Elmer did his research. great books! if you like westerns, this is a must read! And even if you don't, try it, you may find your next great love.

While the writing is good, the characters and story were a little soft for my taste.

Guidall is always a good read.