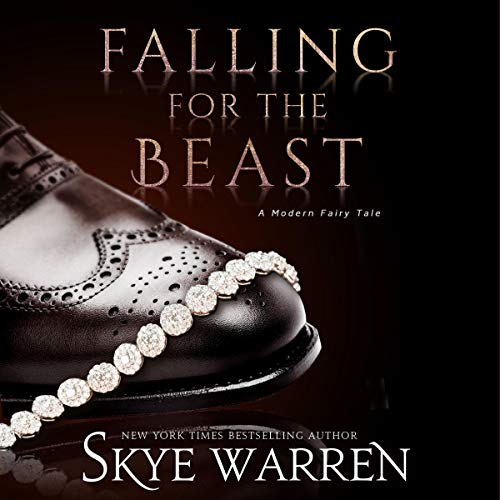 Falling for the Beast

Falling for the Beast

"Their story is not only very memorable and extremely sexy, but I could read this series many times over and never tire of it." (Ms Romantic Reads)

He can never turn back into a prince....

A troubling revelation puts Blake's newfound career in jeopardy - and even worse, puts Erin's impending graduation at risk. He can't risk her future, no matter how much he wants her.

She will never have a happily ever after....

A dark legacy threatens everything they've worked to build. When old debt comes between them, both Blake and Erin must fight to protect each other - and their love.

Since their forbidden beginning, Erin and Blake's relationship has been marked by deep sensuality and intense emotion. The couple is tested at every turn. They're running out of time. Blake and Erin will have to trust each other to forge their own sexy ending.

Author's Note: This book was previously published as a serial in multiple parts, including Beauty Becomes You and Loving the Beast. They've been collected into this volume and revised for new listeners.

Falling for The Beast is the second book in A Modern Fairy Tale Duet.

I absolutely love this series and read it a while ago. These two fabulous characters, Erin and Blake, have been brought wonderfully to life, by Lia Langola and Stephen Dexter, as they go through intense trials in their efforts to reach their HEA. The love between Erin and Blake is just lovely and it was a joy to revisit their story 😍😍😍😍😍

Great narration, but a little less than great story.

I have really mixed feelings about Skye Warrren. I love her stories, but I just can’t seem to fall in love with her writing. And this was exactly what happened with this book as well. I loved it until I didn’t and I just couldn’t get into the story anymore, and that is definitely on me.

The narration was really good, and that, despite everything brought the story alive, and got me going.

Good conclusion to the story

I really liked the way that this book really had Blake and Erin as a team. Their loyalty and love were not questioned, at least by the readers (Erin's low self confidence was a little too much sometimes but overall, it really showcased Blake's love and patience for her). This was an emotional, steamy book and focused on showing them overcoming their own pasts (we learn more about what Blake went through) and class differences.

I listened to the audiobook. Both narrators, Lia and Stephen, were excellent, infusing the story with emotion. I really enjoyed how they told the story and they added to the story. They also had a great range of voices.

What a perfect ending to this duet. Wasn’t what I was expecting at all but in a good way! The drama in this book made it incredible and I couldn’t put it down I had to listen to all of it all at once, it was just absolutely amazing and I can’t wait to listen to more books by this author.

The narrators did a wonderful job in relaying The emotion and feelings that has been portrayed throughout this book I love these two narrators and they have now been moved up to my favourites list.

Excellent narration, ended up where I thought

I love a second book in a series as it makes the narration feel so comfortable. Lia Langola and Stephen Dexter do such a good job it's a joy to listen to them again.

I so wanted to listen to this story as the last book just ended. This one picks up from that point and moves the characters and the story forward. As much as I enjoyed it there was something missing somehow, it just didn't spark me as much as the first book did. I appreciated everything they went through and I was pleased with where they ended up.

Stephen Dexter & Lia Langola nailed these characters it this sweet romantic modern fairy tale where she fell for the beast and the beast after much reluctance melted for her. It seemed the more obstacles Blake put in her way, the more Erin defied him, became more sure of herself that they belonged together and he deserved a HEA.

This ending is so perfect for the duet with so many hot steamy scenes! I fell in love even more with Blake and Erin.

Falling the Beast was the perfect conclusion to this duet. It picked up right where book 1 ended. I enjoyed the seamless transition between the books. I had feared there would be a large time gap between them. I think book 1 focused more on the attraction between Blake and Erin and book 2 focuses more on them as individuals and the worlds that they each came from. Seeing how their pasts have formed them into the couple they are added so much to the story. So many things were thrown at them both as individuals and as a couple, yet they were able to over come it all!

The narration was yet again beyond perfection! Stephen and Lia were by far the best narrators for these characters!

This is book 2 in the series. I could not stop listening to this story. You should have this one ready as soon as you finish the first book “Beauty and the Professor “ this was a beautiful story about character. I think the narration was great I felt the emotions through both books.

Beauty gets her beast and a HEA

I wasn’t disappointed with the ending of this series and I loved that the angst and sexy times continued. We find out more of what Blake experienced in the war and how it’s affecting him still. And we find out more about Erin thesis subject and how it affects them too!
Shocking event in there too just to keep you on the edge!

It’s a series that I will listen to again. The narration was amazing and expressed the characters very well.
Reviewed for Audiobook Obsession 🎧

I Enjoyed These 2 Books

I actually enjoyed reading part 1 and equally enjoyed listening to Part 2. That being said. I enjoyed both versions. I can't say that my own personal visuals were better because Lia and Stephen were awesome narrators. Stephen had me nearly ready to pull my car off the road. He literally took my breath away. To be honest, they both did. However, even though with Part 1 I didn't have the intense audibles as I did with Part 2, my own visualizations, from the authors incredible use of words, was just as intense. That's a fact! Personally, I love ... love, romance, erotic sex and a good story. This series adequately feed my taste buds. Thank You Skye Warren for sharing your imagination with us.

Perfect end to a modern fairytale

This picks up right where the first book ended. It’s a brilliant end to Blake and Erin’s story.

In this book we get to experience more of what makes Blake tick and what made him the man he is today. I love him he’s so well rounded as a character and sexy as hell. Speaking of sexy this book should have a Scoville rating it’s so hot. This one made me blush in the car.

Lea and Stephen are brilliant narrators. They allow you to get lost in Skye’s words. An honest to god pleasure to listen to.

I would recommend this to fans of age gap romance, fairytales with a twist and political scandals.

Perfect ending to and dirty falling for professor story! The only thing missing from epilogue was I felt like it didn’t discuss where his nightmares led... I get like there was a missing piece...Narration was SPOT ON!

The author doesn’t disappoint yet again.... the storyline was hot and sensual, romantic and with a twist on a turn here and there. The narrators did a fabulous job in bringing the story to life. I really enjoyed this and honestly recommend.

This is a modern twist to The fairytale Beauty and the Beast. Erin and Blake have a deep love for each other. Blake is her lover and protector. This story is intense, emotional and very sensual.
Lia Langola and Stephen Dexter were excellent narrators. Bringing all the emotions of the characters to life!
🎧audiobookobsessionreviewer🎧

This is the 2nd book of the Modern Fairy Tale Duet. If you like lots of sex, then this is your book. It seemed like whenever a dilemma arose, they would fix it by having sex. The narrators did a good job.
#audiobookobsession

I really enjoyed this modern-day twist to a classic fairytale, and the conclusion definitely lived up to expectations! Not only was the heat factor as scorching as the first book, the author developed more of the storyline to include Blake and Erin’s struggles and their pasts, their relationships with their parents, and how it affected them as individuals and in turn, their love and trust in one another. There definitely was a better balance of plot and romance in this book. The retelling of the Beauty and the Beast tale was very well done, as it highlighted the many differences between Blake and Erin, and how their love overcame the stereotypes and any obstacle in their way. Lia Langola and Stephen Dexter did a superb performance on narration, enhancing the internal emotions of each character, as well as the emotional connection between the two. Truly a captivating listening experience that kept me engaged throughout.

I loved this 2nd book it was great to read I really enjoyed this book. I couldn't put it down the storyline flowed very well and didnt jump around .which is something I really enjoye when a books dosent jump from here to there all the time I would recommend this book to anyone.

Book 2 by Skye Warren in The Modern Fairytale Duet.

The story picks up right where book 1 stopped to add a seamless story which was appreciated. However, the story itself seemed to take a long time to take off and I felt myself getting a bit bored. Instead of the story continuing on this time we do a lot of learning the backgrounds of both the hero and heroine which ties the story up nicely at the end but I just found myself kind of not caring. The writing was good and the narration was excellent. I just think this story didn’t completely grab me.

Another great read by the talented Skye. An adult themed fairytale that’s dark, hot, wonderful storyline and a hea. Lia and Stephen did an amazing job narrating.