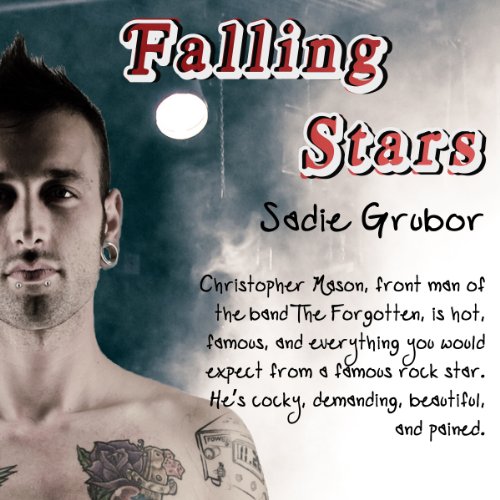 Christopher Mason, front man of the band The Forgotten, is hot, famous, and everything you would expect from a famous rock star. He's cocky, demanding, beautiful, and pained. Despite his fame and beautiful bad boy appearance, he's battling age-old demons on the inside. Demons so powerful, they have the potential to destroy him and his band. He's the ultimate falling star. Something so beautiful within the atmosphere, but so hazardous when trying to catch. You always wish on a falling star, but is all hope lost?

Mia Ryder, lead vocalist of the band Hushed Mentality, is energetic, fun, and laid-back. The good-girl rocker willing to tame this falling star. Her band just made it big and fighting the temptation is hard. She's handling lesser demons of her own. Give in to this bad boy or live for her band? Being everything that Christopher isn't may just burn her in the end.

Determined to get rid of the girl group plaguing his tour, Christopher will do almost anything. Mia fights him head on, causing a cataclysm of stars to shoot into the most beautiful performance of falling stars. Every dog has their day, will Christopher's behavior become enough to bring this dog down? Within the downfall, Christopher Mason becomes sure of one thing, and it's the one thing he's tried so hard to push away. Will Mia be strong enough to catch a falling star?

What listeners say about Falling Stars

Who might you have cast as narrator instead of Nicole Colburn?

anyone. just anyone else.

Do you think Falling Stars needs a follow-up book? Why or why not?

yep, because i love this story and characters. for the love of good, change the narrator though!

i read this Ebook a while back, and was really looking forward to having the audio book to listen to during housework and craft project ect.
i don't know what this narrator was on when she decided to record this voice, but all the males sound like they are high southern Cali surfers that are too bored to be paying attention to anything! i actually cannot finish this, as much as i would love too, because it's just too off putting :(

Is the bad guy really bad?

Yes. It is entertaining, enjoyable, pulls on your emotions, and isn't a formula plot.

How dabilatated Christopher is by his mental and behavioral problems. The descriptions of his ordeal are pretty accurate. Loved how Christopher was determined to have his needs met no matter what. He's a sweet, arrogant, obnoxious guy in love but doesn't know it.

Which character – as performed by Nicole Colburn – was your favorite?

Not one in particular, but Christopher was entertaining.

Beauty and the beast.

Good story. Christopher's personality and mentality is awesome. The women are not hand-wringing, simpering little girls awed by fame.

Would you consider the audio edition of Falling Stars to be better than the print version?

I would have loved to read the printed version.

What was one of the most memorable moments of Falling Stars?

There were so many memorable moments so hard to choose from. But, the one that stand out is when Christopher was able to share his ugly passed with his doctor and Mia. When Mia and Christopher finally got together.

Which character – as performed by Nicole Colburn – was your favorite?

Nicole did a great job with Mia voice and the rest of Mia's family. I didn't like her voice for Christopher, it didn't fit the picture in my mind. There should have been two narrators for this book, I would have recommended Sebastian York.

If you could rename Falling Stars, what would you call it?

No, that's a perfect name for the book. Christopher was Mia's falling star.

I would love to see a movie out of this story.

I just looked through my library to see how many audiobooks I have listened to over the years. At last 250. This is the very first time I am returning a book because the narrator is soooo unbearable.

the narrator was horrible. it was hard to get through the book because of the inflection in Christopher's voice.

Love the story... not the narrator

I love this book. I read it years ago when it first came out, and I looked forward to enjoying it again. And I did love the story. But the narration is terrible. It’s like they didn’t bother to edit it. There were so many repeated lines, words pronounced wrong and over enunciated to the point the characters sometimes sounded robotic.

I wish so badly that this was narrated by someone who can do good male voices because Christopher is one of my favorite characters, but he sounded stupid and lazy because of the narration. Also, there were terrible attempts at accents. Ugh I just really didn’t like this narration. BUT the story is so good, the narration can be overlooked.

Lots of replays in audio. Poorly edited. And narrator made character seem really dense or mentally challenged at times?

dark and will make you cry

the narrator could have gotten some words right. it was still good though. love it.

book is great performance is not

Would have been a great one with a different performance. love the story though. Still worth it