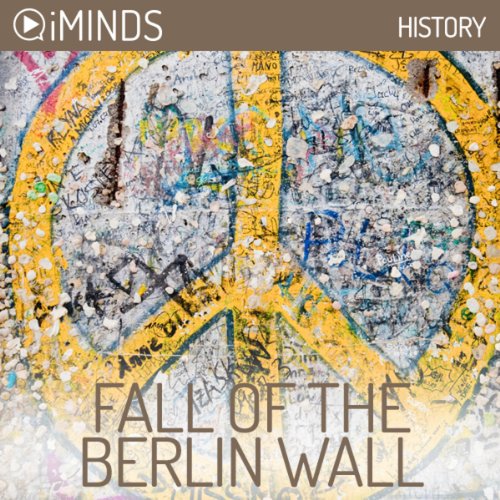 Fall of The Berlin Wall

Sure, most of us now jokingly recall David Hasselhoff or Ronald Reagan when talking about the Berlin Wall, but how much does the average person really know about it? From iMinds comes Fall of the Berlin Wall, a thorough and engaging program aimed at ensuring our understanding of one of the most dramatic moments in modern European history extends farther than Hasselhoff singing in a light-up suit. Performed by the warm and confident Hamish Hughes, this audiobook is a valuable addition to anyone’s collection.

Learn about the Fall of the Berlin Wall with iMinds insightful audio knowledge series. The Berlin Wall stood as a boundary in the German capital for 28 years, 2 months and 26 days. It symbolized the split between not only West and East Berlin, but Western and Eastern Europe as a whole. It was an international symbol of the Cold War and represented an ideological divide between capitalism in the west and communism in the east. Then, on a momentous November day in 1989, the Berlin Wall was dramatically torn down. With its fall tumbled down the idea of a divided Europe.

When it had stood, the Berlin Wall had kept East Berliners from moving from the communist zone of the city to capitalist West Berlin. To those who watched events from the west, the Berlin Wall symbolized the restrictions of those living under a communist government. After World War Two, the Soviet Union imposed communist governments in many Eastern European countries. And to keep western capitalism out of these places, the Soviets built a barrier between communist eastern countries and capitalist western ones. This barrier, which was ideological as well as physical, was termed the “iron curtain” by the west. The barrier between West and East Berlin was known as the “Berlin Wall”.

What listeners say about Fall of The Berlin Wall

Short History Lesson on the Fall of the Wall

We were living in West Germany (with the U.S. military) in 1989 when the Berlin Wall fell, so this listen was very interesting to me. We were able to drive our car over the border into East Germany soon after the wall fell (a thing previously strictly forbidden) and see for ourselves what all the years of division had done. We were horrified to see the deterioration of the buildings and roads. One thing that this brief audio does not mention is that the West Germans were NOT happy about the reunification for many years because of what it did to their economy. They were not one big happy Germany for a long, long time, even though they could now travel freely. President Ronald Reagan did much to bring the cold war to an end, and to bring down the Berlin Wall, and he is given credit for that in this short listen. Overall a very good effort for a BIG subject.